Mapping and mobility: the untapped value of mobile maps

Mapping and navigation has been one the key applications for mobile devices, so much so that an entire class of device – the satnav – is devoted to only this task. But this is difficult territory to map and to navigate, as Apple found when it fell into a publicity crevice with the autumn launch of its Maps service. But this public loss of ground obscured the fact that both Apple and Google may no longer be in the right territory. 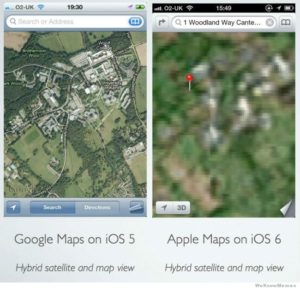 Apple has long been trying to divorce itself from Google, since it realised that with its Android OS and other activities, they weren’t so much frenemies but good old-fashioned enemies. At the heralded launch of iOS 6 in June 2012, the firm announced that it would replace the much loved Google Maps with its own Apple Maps. 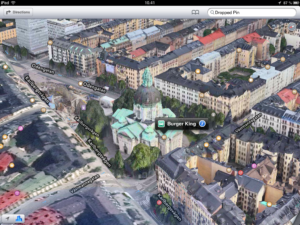 Very elegant it was too, including turn-by-turn navigation, a feature familiar from TomTom and Garmin, but not a feature of Google Maps to date. But that is where the good news ended. Apple Maps, launched in September, was built on marshy ground. It lacked many locations and street names, and locations it did show often appeared in the wrong place. 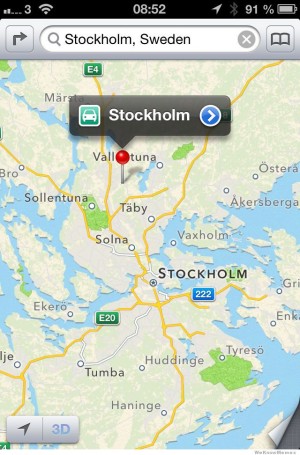 Apple Maps: so where is it, exactly?

On top of that the resolution of its satellite images was lower, reducing the desire to pore over interesting archaeological sites (or your back yard) Google Maps had satisfied. And it was also the map service all iOS apps had to call on – from social network to transport apps – the effect on users was multiplied.

The media was up in arms. The acerbic Brit tech news publication The Register – which refers to Apple lovers as fanboys – lead a charge (Fans rap Apple’s ‘crap’ Map app) and this time the established technology media fell out of Apple’s lap and joined in, giving the company some of its worst press in years, leading, eventually, to the ejection of iOS software head Scott Forstall and others, and the promotion of Brit design poster boy Jony Ive.

The popularity of Mapion, the Japanese map information service, has soared in the last few months.

That this molehill of a problem was picked up on while Apple’s many mountainous failures – from its incoherent media management tools to its inability to develop interfaces for modern forms of working – are still ignored should be noted. And there is so much more to mapping than such details, which are easy to get right – though why Apple didn’t on this occasion is another story. The debacle has also led to many Japanese signing up to the local Mapion and Navitime apps to capture the finegrained on-the-ground detail needed to navigate Tokyo and other Japanese cities. But first some history. 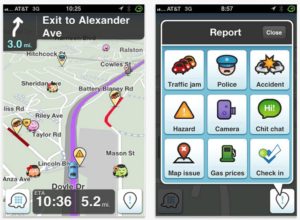 Mapping on the Web got interesting in the late 90s when Multimap and others launched online maps one could point to with a URL, allowing the exchange of directions via email and the embedding of maps on websites. Palm’s pioneering smartphones featured apps, such as Vindigo, which supported mapping restaurants and bars for those on the move. Google Maps pushed user experience, first on the Web then on smartphones, with draggable and zoomable maps and its now ubiquitous inverted teardrop marker. Later Google added the ability to create bespoke maps, integrated Keyhole’s geo-mapping technologies to create Google Earth, and developed the wonderful if slightly creepy Street View – thought this wasn’t available on the iOS version of Google Maps. 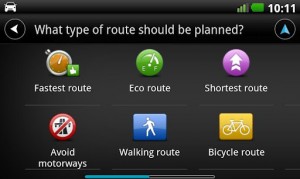 That’s the history, and much has been achieved. But there is so much potential still to be explored in mapping, for both static and mobile users, that the hoo-ha around Apple’s maps should really be relegated to a smudge in this vast canvas. What are the triangulation points for innovation in mapping? 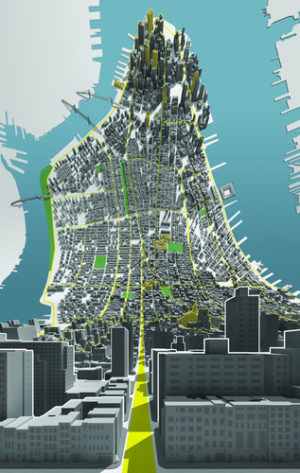 Here and There, BERG. 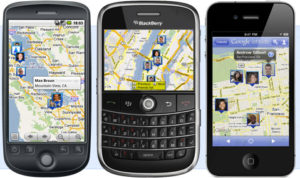 Let’s start by getting all the data on one map. In the age of open data, when we understand more than ever how to structure information, we should be able to layer maps with traffic information, cycle hire points, bus routes, weather, or whatever. (Of course there is a cost to this information but we will cross that bridge when it’s been mapped). Information design, that fine old art, is needed more than ever, to help us visualise and derive value from such maps. TomTom’s ‘crow’s perspective’ interface is wonderful but needs to be bettered. How about BERG’s Here & There ‘horizonless projection’ for improving the presentation of context? 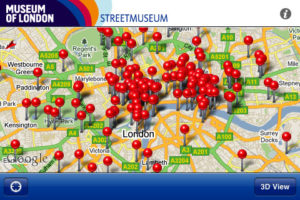 The Museum of London’s app.

With this plethora of places, how might we decide where should go? To answer this social mapping is being leveraged, pioneered in the noughties by Dodgeball, Plazes, and Brightkite, but with Foursquare currently leading – followed ‘me-too’ by the spoiler plays, Facebook’s ‘Places’ and Google’s ‘Latitude’. And when we have determined our choices, how about presenting them mapped in the context of where I am heading? rather than assuming that immediate proximity delivers the most appropriate results? 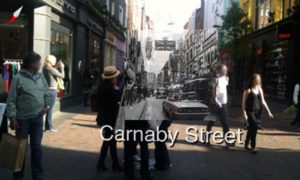 The Museum of London’s app.

The current vogue for ‘augmented reality’ (AR) has not yet had much impact on maps – though the Museum of London’s Streetmuseum app shows its value for the historically inquisitive. But the potential is being recognised for smartphones that when raised to eye level, present an enhanced streetscape, with information on shops and bars flagged, turn-by-turn walking directions, and transport information. When the EU’s Galileo global navigation satellite system is in place we should have more reliable positioning, which will benefit a host of such applications. And when we are out of reach of satellite signals we should still be able to navigate, as Bristol-based Calvium has demonstrated with its indoor location service. Social mapping is also being used by the upstart Waze, making the satnav an input device for flagging up congestion, mapping errors, speed traps and the like (though it has yet to solve the cognitive challenge for drivers of interacting with tiny screens while on the move).

But let’s remember that even the basics of using our trusty Google and Apple maps are still laborious. How about maps that are presented based on the next appointment in one’s diary, perhaps using Apple’s new Passbook model to pop up over any locked screen? (We would need to work out how this could be done without so much artificial intelligence that we end up with ‘Clippy’ syndrome). Or maps you can pass to a friend via your smartphone as you might a printed map?

All these things are possible now or soon. All meet a need, expressed or unexpressed. They make sense cognitively, and appropriate and engaging interaction design models have already been or could easily be devised.

These are some of the areas in which the battles need to be fought. Google’s maps show its ownership of the territory. But maps and ownership are old hat. The company that can bring maps closer to ‘being the territory’ has a world to win. Will it be Apple? On 12 December 2012 Google released its iOS Maps app, finetuned this time with voice guided, turn-by-turn directions, estimated travel times, 3d representations of outlines of buildings viewable from different angles, and making zooming in and out smoother. And Street View returned. A higher level of accuracy, more input from user feedback: Google has regained important ground but, like Apple, may still not be in the right territory.

Nico Macdonald consults on innovation, design and media with clients in publishing, broadcasting and telecommunications, having started working with Apple‘s Mac Plus in the mid-80s, when he pioneered electronic publishing in the UK. He is author of ‘What is Web Design?’, published by RotoVision, and writes for publications including the RSA Journal, the Guardian, Blueprint and Creative Review. In 2008 he founded Media Futures, a high-level and hands-on project on media, society and innovation. And in 2010 co-published BIG POTATOES: The London Manifesto for Innovation. @Nico_Macdonald Read on at spy.co.uk