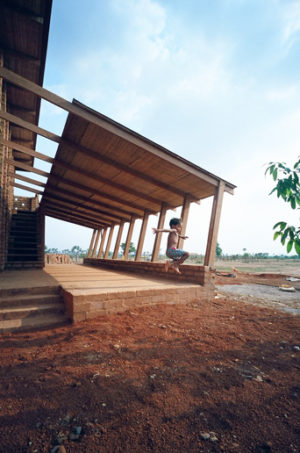 Architecture has a massive capacity for cultural agency, and yet in the last few decades it has only marginally addressed the issue of its social relevance. Until recently, global conflicts, political and ecological migration, overpopulation and the explosive formation of slums certainly did not play a central role in the research, planning and training in the discipline. 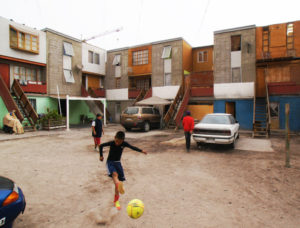 Curator Andres Lepik has chosen 22 innovative architectural projects by planning and design activists who place themselves and their know how at the service of society for a new exhibition, Think Global, Build Social! Architectures for a better world, staged by the Deutsches Architekturmuseum DAM, Frankfurt am Main with the Architekturzentrum Wien, including photographs, plans, models, videos and original material samples. 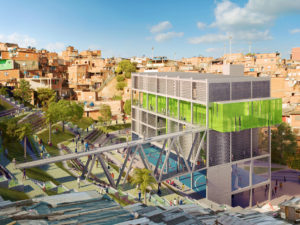 The exhibitors – including Urban-Think Tank, MASS Design Group, Elemental, Diébédo Francis Kéré, Atelier d’architecture autogérée (AAA), Baupiloten, Rudanko + Kankkunen, TYIN tegnestue Architects, Peter Rich Architects, Teddy Cruz, Orange Farm, Al Borde Arquitectos, a.gor.a Architekten and Emilio Caravatti, Matteo Caravatti and Sarah Trianni – are activists who have taken on the responsibility of conceiving and realising projects that will directly benefit those members of society who do not normally have access to qualified architects. Lepik, whose research focuses on three main areas, rural neighborhoods in developing countries, informal cities and new stategies for shrinking cities, feels that in doing so they are lending a new meaning to the demand already called for by Modernist architecture for a combination of ethics and aesthetics. 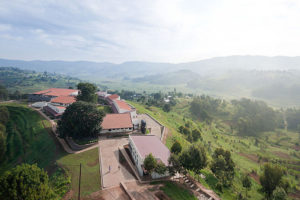 ‘Even if to date no uniform movement with a clear agenda of its own has arisen’, says Lepik, ‘there are many common values or characteristics that would indicate that beyond the pale of ‘iconic architecture’ for some time now another movement has emerged in contemporary architecture that insists on addressing the social issues of a global society.’ 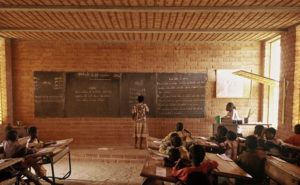 His recent book Moderators of Change presents these and more contemporary examples of social engagement in architecture on a global scale and explores various strategies for how design can actively influence underserved communities. Lepik is the new Director of the Munich Technical University’s Architecture Museum. He was a curator in the Architecture and Design Department of The Museum of Modern Art, New York from 2007-11, where he worked on numerous acquisitions for the collection, was involved in the Young Architects Program at PS1 and curated Small Scale, Big Change. New Architectures of Social Engagement, a well received exhibition accompanied by a book of the same name. He is currently a Loeb Fellow at Harvard Graduate School of Design, where he plans to explore the history and theory of social engagement in architecture in the 20th century, from Modernism to contemporary practice. 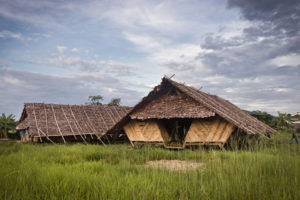 His latest exhibition is subdivided into five thematic chapters: Materials, Dwellings, Participation, Culture, Design-Build Programmes, categories which are flexible and mutually compatible, and many of the examples on show present several aspects at once. His selection centres on buildings realized more or less over the last decade and where there has already been a visible local impact. The following curatorial notes explain these issues further:

Materials: Modernist architecture relies on industrially manufactured construction materials such as steel, glass and concrete. Yet precisely in the poor countries of the world, the use of materials that are easily found such as clay or bamboo is ecologically and economically far more appropriate, whereby they tend to be looked down on. In order to reanimate partly forgotten traditions or enable such traditions to arise in the first place, the projects on display by Emilio Caravatti in Mali, Anna Heringer and Martin Rauch in Morocco and Bangladesh, Al Borde in Ecuador, not to mention John and Cynthia Hardy‘s Green School in Indonesia are immensely important. Their increasing recognition in the developed world also leads to greater appreciation for them in the countries where the projects are located. 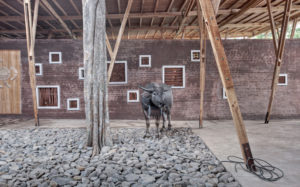 Dwelling. In the absence of sufficient residential spaces, many of the world’s countless migrants and refugees set up home themselves, without the help of architects. Elemental in Chile has dedicated itself to redefining the notion of ‘incremental housing’ – dwellings that can be adapted to economic conditions. The young architects at a.gor.a design refugee structures for the borders of Thailand. By contrast, Cologne’s BeL and Paris’s Druot, Lacaton, Vassal aim their strategies to preserve or provide socially affordable dwellings in Europe’s developed nations.

Participation: An architecture project can be included and accepted in a local setting more durably and successfully by involving the users in the planning, and even in the construction process. Both Boston’s Mass Design Group (MASS), Francis Kéré in Berlin and Los Angeles’ Kounkuey Design Initiative with its projects in Africa not to mention Atelier d’architecture autogérée (AAA) in Paris have developed strategies for such participation.

Culture: Specifically in informal settlements, for example, slums, favelas, townships, not only is there a lack of sufficient infrastructure but usually also of the institutions that able a cultural identity to emerge. Peter Rich, from Johannesburg, South Africa, and Finland’s Hollmén Reuter Sandman have realized trailblazing projects in this regard in Africa, while the young Norwegian office of TYIN and the Finnish company Rudanko + Kankkunen have achieved something similar in Southeast Asia – in the form of libraries, schools, women’s centres and cultural centres. Urban-Think Tank designs cultural buildings for South American favelas that function as the catalyst of social change. 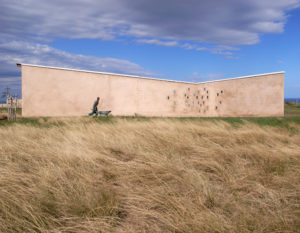 Design/Build programmes: For some time now various architectural schools have run so-called ‘design/build’ programmes to give their students a hands-on reference to the social dimension to their later profession. Here, students can experience how what they have learned can be of benefit, for example when building schools or kindergartens abroad. Many European groups, such as Baupiloten (TU Berlin), Bauen für OrangeFarm (TU Munich), design.build Studio (TU Vienna), BASEhabitat (Kunstuniversität Linz) and architecture students from RWTH Aachen have established durable relationships with locations abroad and thus contribute to knowledge transfer to the respective countries.

The leading architecture magazine ARCH+ has collaborated with the Deutsche Architekturmuseum, the Architekturzentrum Wien, and Lepik to publish an issue (summer 2013) that accompanies the Think Global, Build Social! exhibition.