From Urban Acupuncture to the Third Generation City

Urban Acupuncture is a biourban theory that combines sociology and urban design with the traditional Chinese medical theory of acupuncture, explains Marco Casagrande, a Finnish architect, biourbanist and social theorist. As a design methodology, it is focused on tactical, small-scale interventions in the urban fabric, and ripple effects and the transformation of the larger urban organism. 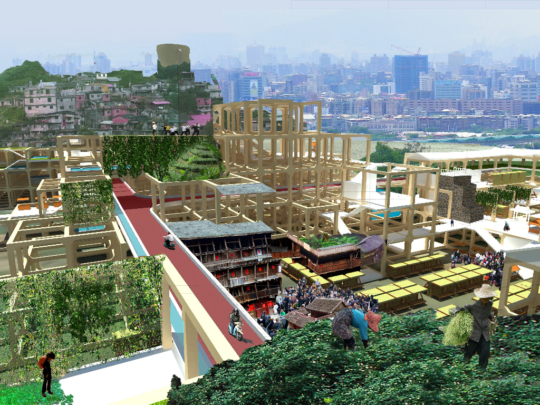 Paracity, a biourban organism building on the principles of Open Form: individual design-build actions generating spontaneous communicative reactions on the surrounding built human environment and this organic constructivist dialogue leading into self-organized community structures, development and knowledge building. The growing organism the Paracity is based on a three dimensional wooden primary structure, organic grid with spatial modules of 6 x 6 x 6 metres constructed out of CLT cross-laminated timber sticks. This simple structure can be modified and grown by the community members working as teams or by an assigned Paracity constructor. © Casagrande Laboratory.

Open Form is close to the original Taiwanese ways of developing the self-organised and often “illegal” communities. These micro-urban settlements contain a high volume of local knowledge, which we believe will start composting in Paracity, once the development of the community is in the hands of the citizens.

Marco Casagrande is a Finnish architect, biourbanist and social theorist. He is the principal of the Casagrande Laboratory, an internationally operating architecture and innovation office based in Helsinki, Finland, and Vice-President of the International Society of Biourbanism. From the early stages of his career Casagrande started to mix architecture with other disciplines of art and science landing with a series of ecologically conscious architectural installations around the world. In his view, ‘there is no other reality than nature’, and architects are design shamans who merely interpret what the bigger nature of the shared mind is transmitting.

He views cities as complex energy organisms in which different overlapping layers of energy flows are determining the actions of the citizens as well as the development of the city. By mixing environmentalism and urban design he is developing methods of Urban Acupuncture in order to create an ecologically sustainable urban development towards the so-called Third Generation City. Casagrande has taught in 65 academic institutions in 25 countries and realized more than 70 works in 14 different countries.