The sidra tree, Ziziphus spina-christi, is a national symbol of Qatar’s heritage. It represents resilience and adaptability in the face of hostile conditions, and although not native to the country, has grown in the deserts of Qatar for generations. ‘The Sidra became a beacon of comfort in the harsh desert environment, allowing life to flourish. The Sidra also provided shade and shelter to travellers and scholars, who would escape the desert heat, gather together and share knowledge’. ¹

The species is wide-spreading and deep-rooted, and produces edible fruit. No wonder that while I was pondering what sustainable urbanism might mean to Qatar, the silhouette of a single sidra tree surviving alone on a seemingly abandoned island ³ in the bay, set against the cluster of city high-rise, was utterly compelling – and likewise, the urge to sit beneath it and view the city from the dappled shade of its canopy. Had it been purposefully protected during the recent clearance of the island development? Could a programme of heritage seed collection from that one tree, propagate an urban forest for Qatar? This beautiful defiant specimen no doubt predates any of the buildings that make the skyline, and may well outlive them.

“Urban forestry is the management of trees for their contribution to the physiological, sociological, and economic wellbeing of urban society”. ² 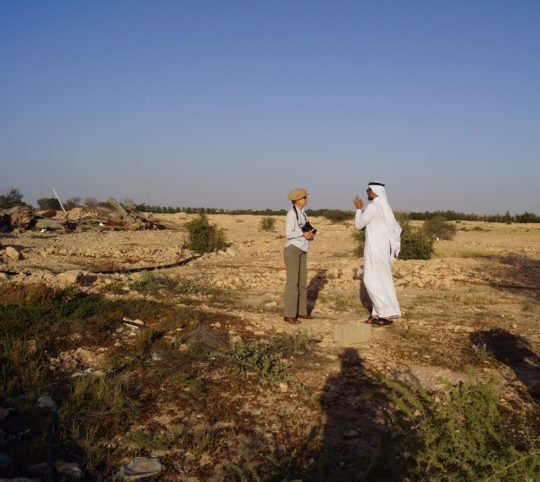 Johanna Gibbons and Sulaim Al Thani during the Qatar University visit to his desert farm on the outskirts of Doha, 22 March 2016. © Dr. Anna Grichting.

It was a privilege to take a field trip in late March 2016 to visit Suhaim Altari’s farm on the outskirts of Doha, to enjoy and share his passion for the flora of Qatar, and to discuss the possibilities of transformation through permaculture. Here too a grand old sidra tree marked the land, and beneath it a layer of apple-like edible fruit formed a blanket over the saline soil. Desert thorn, Lycium shawii, offered up its miniature edible jewel-like berries in silty depressions. Capers, Capparis spinosa, spread prostrate over a parched landscape, flowered delicately, edible flower buds tightly holding culinary and medicinal goodness.

The wellhead pump puffed black smoke under a broad mature acacia, and a large hibiscus, Hibiscus rosa-sinensis, billowed out over the track, flowering boldly in defiance of the arid conditions. We spoke of planting thick shelter belts as linear forests of indigenous trees and plants to preserve the soils and create a more protected microclimate and ‘growing’ farm buildings from the geology, recycling stone that lay in the soil for foundations, and reclaiming farm timber for construction. We spoke of the possibility of creating a vernacular that drew from the land, merging built form and forest clumps to cool, protect and sustain. Suhaim presented the acacia tree under which he’d collected desert truffles since he was a child. Surely this was the seed from which his sincere fascination with permaculture developed.

The Qatar University campus landscape is articulated by wadis, ephemeral riverbeds that comes to life during heavy rainfall.  In these valleys, the natural topography supports forests of self-seeded vegetation that express indigenous characteristics of the place. Yet these features, which are ultimately self-sustaining, are signposted as ‘fields’ of restricted access and biological research, rather than integral to the campus experience. They display the vital interrelationship of soil, water and vegetation, natural assets to be mapped, explored and promoted as part of the campus ecology.

The Edible Campus initiative at Qatar University, initiated by Professor Anna Grichting in 2012, could be informed and expanded by these landscapes. Water-demanding growing plots could be changed to a patchy mosaic of indigenous edible plants across the campus within the wadis, adapted to intermittent irrigation. This would be a more self-sustaining approach to edible planting, drawn from the palette of native species, like those at the desert farm, resilient from one generation of students to the next; a project developed and nurtured as a cross-disciplinary collaboration involving social science, biological and environmental science and architecture.

My experiences weave together three possibilities of interlinked research strategies:

1. Provenance, a community programme: The propagation of indigenous species from known heritage trees in Qatar, with the island in the bay promoted as a reserve and the focus of activity.

2. Urban Forestry, a city programme: A city-wide Tree Charter supported by the business and academic institutions to spotlight the importance of indigenous trees and plants in modifying microclimate, stabilising soils, beautifying the city, and inspiring an urban forestry movement at local and city-wide level.

³ The Old Palm Tree Island, formerly a private resort, recently cleared, save for one sidra tree.