‘Be playful and creative!’, as the artist-architect Constant Nieuwenhuys said in relation to his speculative utopian city, New Babylon (1959-74). Architects like the London-based Alisa Andrasek and Jose Sanchez (Croatian and Chilean, respectively) want to move beyond bio-formalism, and play is one means to this end.

Commissioned by the Greater London Authority as part its Wonder series celebrating the London Olympics and ParaOlympics during the summer of 2012, and alterable by the public, Bloom conveys the creativity of everyone that encounters it, for when they play and discover possibilities, the actual design emerges. 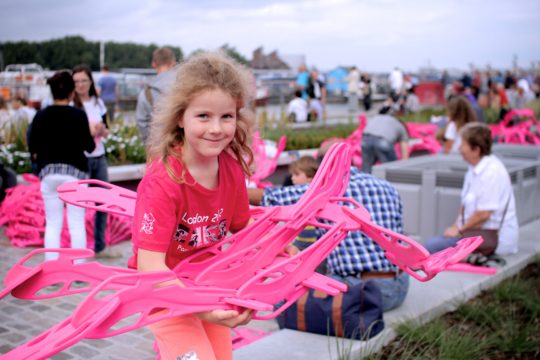 An urban toy in the official Olympics colour of neon pink, it is a reconfigurable system of 60,000 recyclable plastic cells that is very easy to build, with attractive results developing fast. Its aggregation has a number of curved steel benches, which enable a number of connection points from which the structure could start growing. 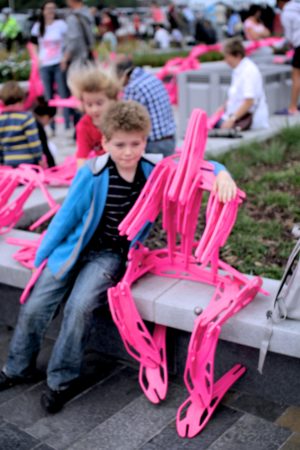 ‘We looked at LEGO, which is generic and universal, and other toys that could be assembled in different ways’, says Andrasek. ‘It’s a game, and, as in complexity theory, the simplest generic element can recombine.’

So in each of its three venues in London during the summer of 2012, the UCL quadrangle, Victoria Park near the Olympic Park site and in Greenwich next to the Cutty Sark, Bloom’s identity was adapted. Each of its cells is potentially a souvenir people can take home, a symbol of the event and of participation in the collective play Bloom encourages. The team has designed each of the possible connections between the cells, so through recombining the connections in each cell, or, as with music, following rhythms of repeating strings of the same connections, people can build a ring, a spiral, a distributed branch, among other things.

‘There is a universality to the cells, but they also have embedded biases and information encoded into them,’ says Andrasek, who initially asked students without any knowledge of the system concept to play and design freely with it, which gave the team awareness that it could be very easy for people to build. ‘No matter how randomly participants connect them, they will always exhibit recognizable behaviours. By following certain combinations intuitively you can invent a chair or a bench, or a canopy.’ Being so resilient and flexible, they also twist into new shapes and configurations, so people become active in ‘seeding new ground sequences that can be used as urban furniture or unpredictable formations.’ They have even considered adding a tagging system to the game, giving it a new identity with virtual tracking.

At each venue ‘people came, and while with art pieces, they can’t touch them, here they just went for it’, she adds. ‘The interaction is an energy source’. Initially it teaches them rules-based generative propagation, but then becomes something they can build themselves.

Bloom will be shown in further UK and international locations to be confirmed in 2012-13. Details on the Bloom website.