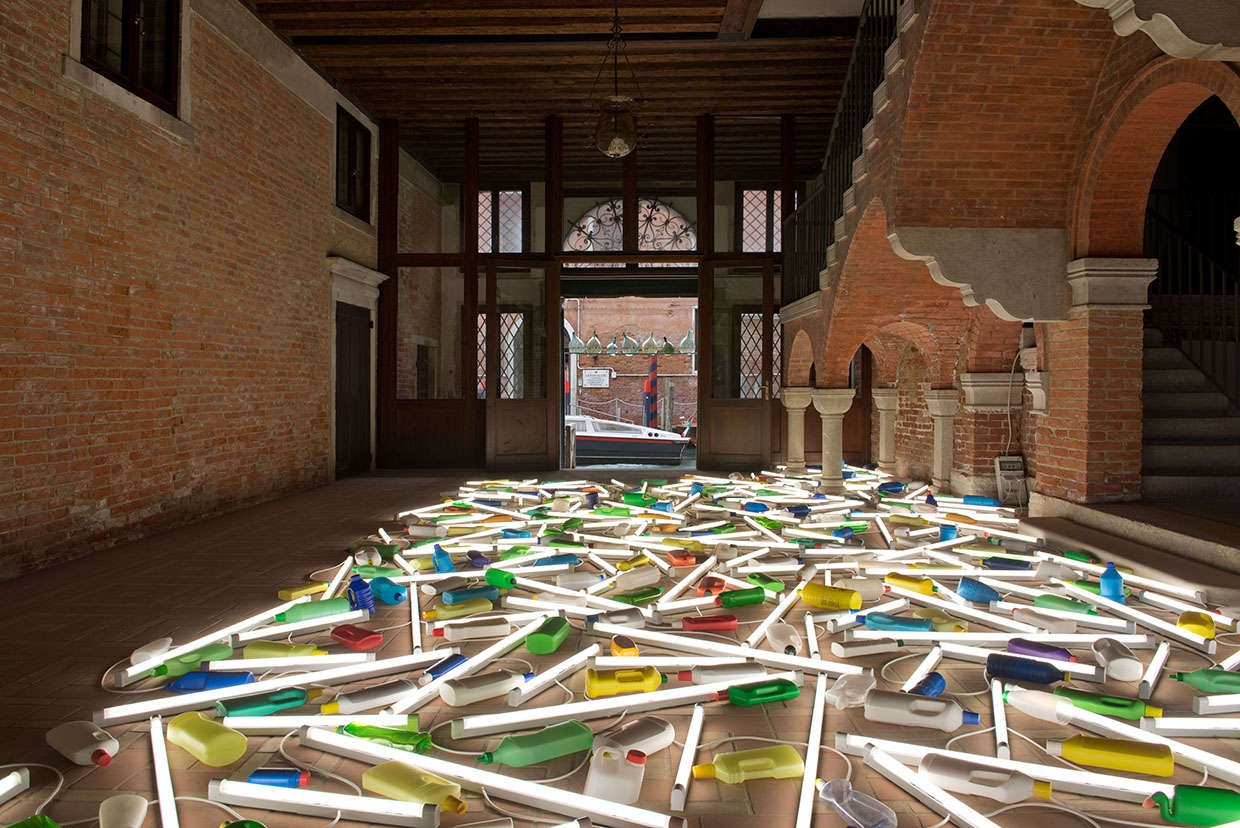 Below an introduction by Urbanista’s Editor-in-chief, Lucy Bullivant, Christine Styrnau recounts the highlights of this year’s Venice Biennale.

The Venice Biennale’s 55th International Art Exhibition, I Palazzo Enciclopedico, staged from 1 June 2013 to 24 November 2013, has been curated by Massimiliano Gioni (curator and art critic, and currently the Associate Director and Director of Exhibitions at the New Museum in NYC and Artistic Director of the Nicolas Trussardi Foundation) who asks the audience to look into the world of artists and their ‘creative urges’, as Biennale President Paolo Baratta put it.

This Biennale draws inspiration from the model of an utopian dream made by the Italian-born American folk artist Marino Auriti who filed a design for it with the US Patent Office in 1955. It depicted his Palazzo Enciclopedico, an imaginary museum that was meant, optimistically, to house all worldly knowledge. He planned it as a gigantic 136 storey building to be constructed in Washington DC, which would stand 700 metres tall and extend over 16 blocks.  Auriti’s plan was never realised, but Gioni regards such a dream of centralising in one single place a universal, all-embracing knowledge a strong, recurring theme in the history of art and culture, one that Auriti shares with many other artists, writers, scientists and prophets. 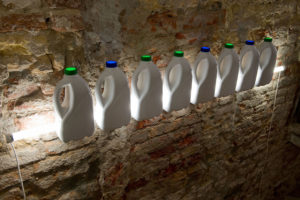 Gioni maintains that ‘such attempts to structure knowledge into all-inclusive systems seem ever more necessary and even more desperate’, reminding us that if his Biennale itself comes across as ‘an elaborate and fragile construction, a mental architecture as fantastical as it is delirious, it only serves to remind that the biennale as a model itself is based on an ‘impossible desire to concentrate the infinite worlds of contemporary art in a single place’ – and thus possesses a ‘dizzying’ absurdity to it as a cultural task. 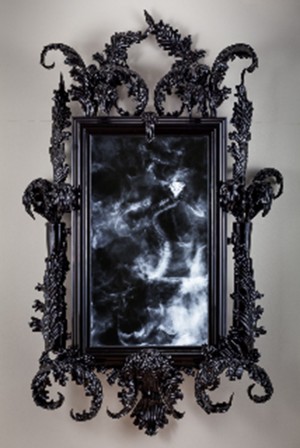 ‘Blurring the line between professional artists and amateurs, outsiders and insiders, the exhibition takes an anthropological approach to the study of images, focussing in particular on the realms of the imaginary and the function of the imagination. What room is left for internal images – for dreams, hallucinations and visions – in an era besieged by external ones? And what is the point of creating an image of the world when the world itself has increasingly become like an image?’ 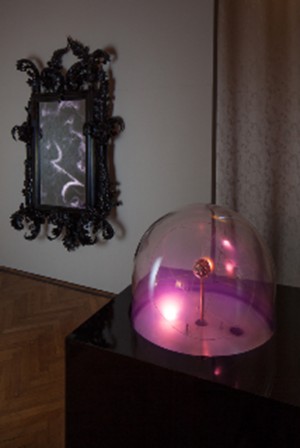 Below Christine Styrnau recounts for Urbanista.org a few personal highlights of this Biennale ‘about obsessions and the transformative power of the imagination’. For her, the works by Jeremy Deller and Ai Wei Wei are some of the more compelling of those on show in Venice this year. 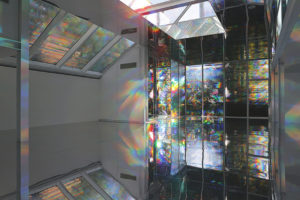 Views of the Korean Pavilion. (Photos © Jaeho Chong and Kimsooja, courtesy of Arko and Kimsooja Studio)

Bill Culbert is representing New Zealand at the Istituto Santa Maria della Pieta (La Pieta) on the waterfront in Castello. Culbert has transformed ordinary and often discarded objects, such as formica chairs and wardrobes with the addition of neon tubes, into light and delicate objects.  Bebop, incorporating suspended chairs and neon tubes at the entrance to La Pieta and the piece Daylight Flotsam Venice, using 150 fluorescent neon tubes and recycled plastic bottles, both reflect the play of light on the Venice lagoon.  Culbert’s work in this pavilion is a link to the world of Venice and initiates responses similar to Titian and Ruskin’s historic views of Venice. 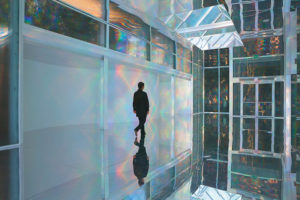 Views of the Korean Pavilion. (Photos © Jaeho Chong and Kimsooja, courtesy of Arko and Kimsooja Studio)

Glassstress: White Light/White Heat is a collateral event at the Biennale at the Palazzo Cavalli Franchetti presenting newly commissioned works created in Murano with glass experts by contemporary artists including Tracey Emin, Ron Arad and Cornelia Parker, some of whom are working in glass for the first time. The stand-out work here is Mat Collishaw’s East of Eden 2013 that appears to trap wisps of smoke and a serpent within its glass ‘mirror’ and is surrounded by on ornate frame in the rococo-vegetal style of 15th-century Murano glass. Again these works incorporate a link to the city of Venice. 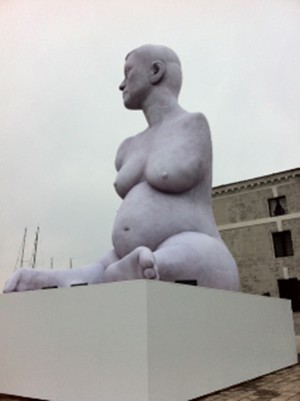 The Korean Pavilion in the Giardini asks visitors to move from bright light to a dark enclosed space and then stand alone there for a minute.  The artist Kimsooja enables one to experience the contrast of light and dark and provides a place of quiet contemplation away from the Biennale circus.  We are invited inside a world that exists ‘outside’ the world of the Biennale for a moment. The Korean Pavilion itself, being slightly hidden from the dominant French, German and British pavilions, is a light and airy building with a rather temporary feel. 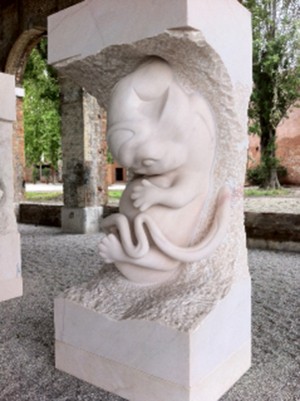 Marc Quinn’s large exhibition at the Giorgio Cini Foundation at San Giorgio Maggiore has been criticised in many quarters particularly for the inflatable of his work Alison Lapper Pregnant (2005) that stands outside the church of San Giorgio Maggiore. The criticism was raised as the piece is too oversized, in the wrong colour and did not fit the context.  However, new stunning large-scale bronzes of seashells from the series The Archaeology of Art (2013) appear to fit perfectly around the exterior of the exhibition space, as does his work Evolution (2005), consisting of ten marble sculptures at the water’s edge at the rear of the Foundation overlooking the lagoon. These works enable the visitor to ignore the Damien Hirst-style shop selling editions of Quinn’s t-shirts and expensive silk scarves within the exhibition.  Here, Marc Quinn’s world also blatantly incorporates the commercial world of the artist. 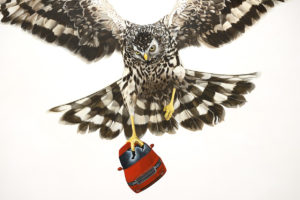 Jeremy Deller’s exhibition in the British Pavilion focuses on Deller’s own world of Englishness, previously incarnated in work such as The Battle of Orgreave 2001 and in his folk archive. Deller’s show English Magic confronts the viewer initially with a painting entitled A good day for cyclists, showing a hen harrier crushing a Range Rover – Deller being a keen cyclist and Range Rovers being the scourge of cyclists.  The depiction of the hen harrier is a reference to the shooting of two of these birds on the Sandringham Estate in October 2007 on a day when Prince Harry and a friend were shooting, probably arriving in a Range Rover themselves. We sit starving amidst our gold is a mural relating to the positioning of Roman Abramovich’s huge yacht during the previous Biennale that blocked the promenade with its security fence.  A colossal figure is seen throwing the yacht into the lagoon.  It is Deller’s intention that William Morris is in fact that colossal figure, due to his socialist views and his influence on design in England in the 19th century. 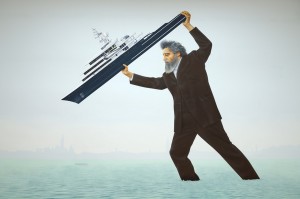 The British pavilion also includes a room exhibiting drawings by prisoners in the UK, many of whom are former soldiers who served in Iraq and Afghanistan. These excellently executed drawings depict portraits of people who were connected to the conflicts, including Dr David Kelly.  A film in another room of the Pavilion brings together all the strands of the exhibition including stunning shots of hen harriers, the crushing of Range Rovers and a blow-up Stonehenge and using a soundtrack featuring Vaughan Williams, A Guy called Gerald and David Bowie, with their works interpreted by the Melodians Steel Orchestra. Jeremy Deller presents a complex, diverse and political image of Great Britain.  If you are exhausted after all of this you can even enjoy a free cup of tea during Deller’s show in homage to the pavilion’s previous incarnation as the Biennale’s tearooms.  The inclusion of the tearoom shows Deller’s sense of humour and the ability not to take himself too seriously. 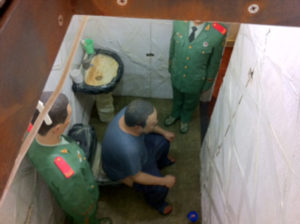 Ai Wei Wei’s most impressive work in the Biennale is a work outside the main competition in the Church of Sant’Antonin in Castello.  This work S.A.C.R.E.D. was created in secret in China and transported to the church by means not divulged by the artist.  It consists of six large iron boxes, each weighing 2.5 tonnes. Viewing into the boxes is only achieved only through small ‘letterboxes’. It lets you see hyper-realistic models and sets depicting his 81-day incarceration in a cell in a secret prison. We can see Wei Wei being watched around the clock by two guards, including when he visits the toilet and whilst he is sleeping.  The viewer becomes the watching guards.  Even the computer and printer that the guards used are recreated in perfect miniature detail.  Peering into the boxes is a reminder of 3D illusionistic painting where the viewer is in the scene.  Looking down, we are spying on Ai Wei Wei and also on the guards.  The viewer therefore becomes superior to the guards. We cannot imagine how the artist’s mind coped during his internment with these conditions, especially as we are visitors free to perambulate a city and its art. A framing of reality that calls from our imaginative skills the capacity for empathy towards a particular confinement that stands for so many other situations of others globally, it is unimaginable, and hopefully we will never be forced to suffer the same conditions as this particular artist.

Christine Styrnau is the owner of Valentine Ellis & Co, accountants for the arts. She studied History of Art at University of London and has had a keen interest in contemporary art and architecture for many years.