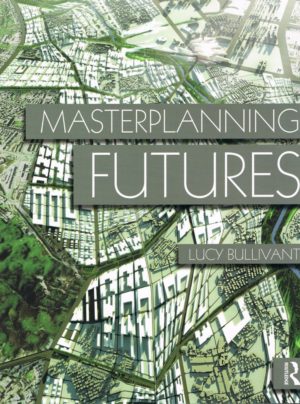 Masterplanning Futures, Lucy Bullivant’s latest book published by Routledge in 2012, has been shortlisted for the Urban Design Group’s Francis Tibbalds Award. For the fourth year running, the Urban Design Group (UDG) Awards programme will include a Book Award named in memory of the exceptional UK urban planner Francis Tibbalds, who championed the causes of good urban design until his untimely death in January 1992, aged 50.

Eight finalists have been selected and each is reviewed by a different member of the review panel chaired by Alastair Donald, including Juliet Bidgood, Marc Furnival, Jonathan Kendall and Laurie Mentiplay. The panel will choose the winner, which will be announced at the UDG Awards event in February 2014.

Founded in 1978, the Urban Design Group  is a campaigning membership organisation with over 1000 members who care about the quality of life in our cities, towns and villages, and believe that raising standards of urban design is central to its improvement.

‘As a timely panorama of approaches to masterplanning emerging across the urbanizing world, Masterplanning Futures explores the challenges facing the city in the 21st century and the role of the plan in shaping them physically and ergo socially, politically and economically. What kinds of plans should these be? Indeed Bullivant asks what plans are for, if not to ‘defy the disappointing, inadequate or anachronistic reality of many earlier speculations’.

Set against the wider horizon appearing in the wake of the global economic crisis, this book presents a thoroughly researched argument for a reclaimed approach to masterplanning. A lively, discursive introduction charts how masterplans can no longer be singular, top-down prescriptions but must offer a collective vision and operate as a framework that can be adapted over time. There is a new deftness to the plans that Bullivant exemplifies. These propose carefully evidenced, resourceful, spatial structures that work across scales from the city region to the street.

All together an account of the process of developing twenty adaptive urban plans is organized into ten chapters each articulating the myriad of contexts driving the plans. Some of the themes such as post-industrial urban regeneration, urban growth and landscape driven plans are familiar but still instructive. The account of the creation of the Ørestad strip in Copenhagen shows how a clear strategic plan coupled with an iterative design competition process can lead to a crisp, characterful assembly of buildings and spaces. The Milan citywide Metrogramma plan and Brisbane’s Smart Cities Strategy show how plans can skillfully converge and give coherence to growth while remaking a more legible infrastructure.

While emphasizing the informal and social dynamics of cities, Masterplanning Futures celebrates the struggle for coherent urban form. This is seen in MVRDV’s ebullient work in the Netherlands and Spain, OMA’s Qianhai Port City, China, and in a number of projects that expand parametric design to a city scale. Or in the beguiling Saemangeum Island City, South Korea, by ARU that is made from idealized city pieces borrowed from Barceloneta, Malmö, Paris, New York…

There is an almost mythical quality to the place called city – where those that have achieved a certain convergence of cultures and resources become iconic in the map of the world – the pleasure of them transcending the work they are made of. Masterplanning Futures makes a worthwhile casebook for these possible cities.’