On 1 Feb 2013, the Organizing Committee of Shenzhen Biennale of Urbanism/Architecture announced its decisions concerning the curatorial positions for the 5th UABB*Shenzhen (Urbanism/Architecture Bi-City Biennale), which will open in Shekou, Shenzhen, on Friday 6 December 2013. It is the latest edition of the Shenzhen & Hong Kong Bi-city Biennale of Urbanism/Architecture founded in 2005 and developed since that year as a dual-city operation. To date more than 520 exceptional international projects have been exhibited at the event, attracting more than 600,000 visitors. The two cities are this time each staging their own exhibition, sharing certain exhibits and events, and the UABB* Hong Kong Biennale will launch in late 2013 or early 2014.

The Hong Kong & Shenzhen Bi-City Biennale of Urbanism/Architecture has been jointly organized by the Hong Kong Institute of Architects (HKIA), Hong Kong Institute of Planners (HKIP) and Hong Kong Designers Association (HKDA). It debuted in 2007, with the exhibition Refabricating City held at the Hong Kong Central Police Station, a renowned historical building, receiving positive feedback. The event was the first architecture, planning and design exposition of an international standard hosted in Hong Kong. The second edition of the Hong Kong & Shenzhen Bi-city Biennale of Urbanism/Architecture, with the theme of City Mobilization, was held on the West Kowloon Waterfront Promenade in 2009.

The last Biennale, Tri-Ciprocal Cities: The Time, The Place, The People, was held in the spring of 2012, was curated by Terence Riley. 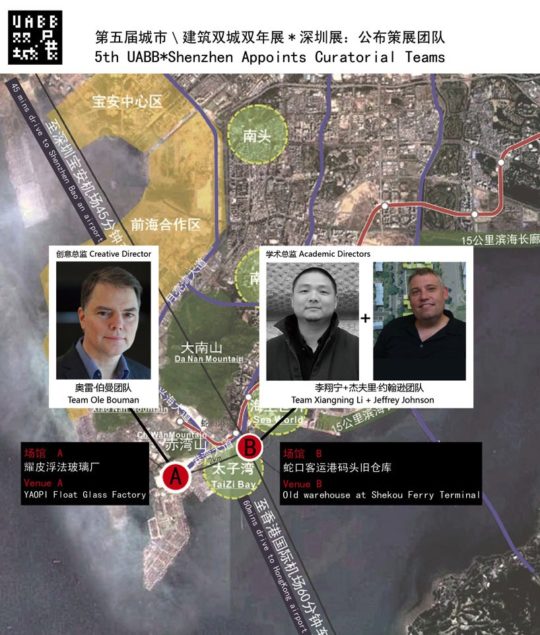 The 5th UABB* Shenzhen Biennale will be delivered by two curatorial teams, one led by Ole Bouman, who is to be Creative Director, and the other led by Li Xiangning + Jeffrey Johnson (Academic Directors). Bouman will collaborate with Stylepark on Urban Labs.

The theme of the 5th UABB*Shenzhen is Urban Border, to emphasize the diversity, differences and individuality ignored, or even hidden, by mainstream trends and homogeneity inherent in fast-track urbanization. UABB* explains that in the context of sociology, the theme implies the margins of urban space, fringe groups, and non-mainstream lifestyles; in the context of political science, it implies the adjustment in the system of organizing urban public resources and the ways such resources are distributed, and in the context of urban geography, it also refers to the UGB (Urban Growth Boundary), areas in-between, and the relationship between city and nature.

The Biennale site will be at Shekou, an industrial zone in the Nanshan District of Shenzhen, which the UABB*Shenzhen describes as ‘the experimental field of reform and opening-up in China’. The Shekou Industrial Zone is undergoing renewal and upgrading, and is providing UABB with an opportunity to witness a new chapter of urbanization in the Pearl River Delta (PRD) of China. Some Biennale activities will also be organized at other sites in the city. The main venues are the former YAOPI Float Glass Factory (Venue A) and the Old Warehouse at Shekou Ferry Terminal (Venue B), both belonging to China Merchants Shekou Industrial Zone Co., Ltd., and they will be linked by public transportation and greenways. Ole Bouman, Creative Director, will be in charge of Venue A, the Manifesto/Prospective venue, while the Academic Directors, Li & Johnson, will make an exhibition for Venue B, described as the Biennale’s ‘Documentary/Retrospective venue’.

Ole Bouman is a Dutch architecture specialist, author and educator who has long been active in the fields of global architecture and urbanism. He was the Director of the Netherlands Architecture Institute (NAi) for 6 years until January 2013 and Editor of Archis and Volume magazines prior to that from 1996. He has taught and lectured at internationally renowned universities and cultural institutions, and is an experienced curator who has been responsible for exhibitions at the Venice Architecture Biennale and the Sao Paulo Biennale. His exhibition, Housing with a Mission, for the last UABB*Shenzhen won the Organizer Committee Award. Stylepark is a leading international architecture and design platform of curators, consultants and commentators which mediates between architects, planners and urbanists.

Li Xiangning is from China and Jeffrey Johnson from the United States. Li Xiangning is a Full Professor in the College of Architecture and Urban Planning, Tongji University, and a renowned scholar of Chinese contemporary architecture theory, criticism and curation. He has lectured at universities such as Harvard and Princeton, was the Chief Curator of the Hainan Sanya Design Biennale, and curated exhibitions at the Milan Triennale and Chengdu Biennale. Jeffrey Johnson is the founder and director of China Lab at Columbia University. Both have participated in UABB*Shenzhen before.