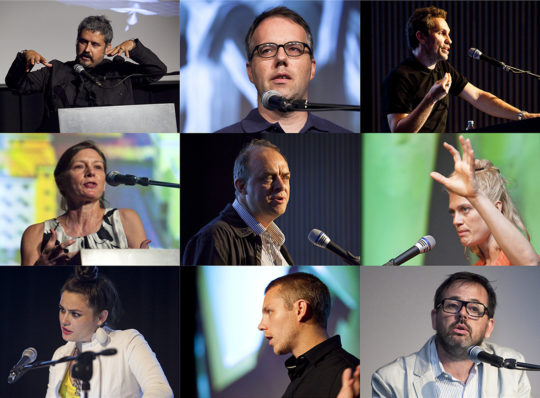 Super-Seeding, the latest international architectural symposium in the acclaimed Proto/e/co/logics series curated by architects Alisa Andrasek (Biothing) and Bruno Juričić and staged by MLAUS, the Mediterranean Laboratory for Architecture and Urban Strategies, a private institute of architecture founded in Croatia by architect and academic Bruno Juričić, will be held on Saturday 24 August 2013 from 9.30-20.30hrs at Hotel Neptun-Istra, sited by the sea on the Veliki Brijun island in the beautiful Brijuni National Park in Croatia.

Veliki Brijuni island – part of the Brijuni National Park covering all 14 Brijuni islands – where the Super-Seeding symposium will be held at Hotel Neptun-Istria, on Sat 24 August 2013.

The Park stretches along the south-west coast of the Istrian peninsular, separated from the mainland by the Fazana Channel 3 km wide, and 7km from Pula, a road, rail, air and maritime centre near Fazana, the terminal for the frequent connections by boat, a 15 minute ride. 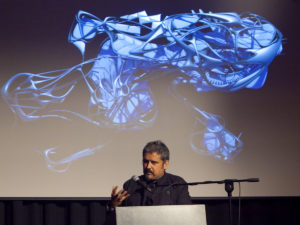 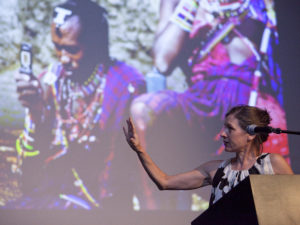 Keller Easterling, speaking at The Field is Open symposium, 2012, © MLAUS.

Super-Seeding will feature architects and practitioners including Philippe Rahm, Alisa Andrasek (Biothing), Claudia Pasquero (ecoLogicStudio), Achim Menges, Jason Payne, Luciana Parisi, Giuseppe Longo (keynote lecture at 7.30pm), Peter Trummer, Michael Osman, and Frédéric Migayrou, Curator of Architecture at the Pompidou Centre. The morning session is entitled ‘Synthetic Constructability’; the afternoon session, ‘Emitting Oddities’, and the one day symposium culminates in a Gala dinner party at the Bizantine Castrum Ruins, Veli Brijun from 9.30pm for everyone attending. The symposium costs 34 euros including the cost of the round trip by boat from the mainland to Brijuni and back). To register email: info@mlaus.net or tel: +38552522170. The event follows five days of intensive design workshops also staged by MLAUS, and is supported by the city of Pula, the Region of Istria, Skira Architectural Lighting, podledaj.to, Urban Strategies University of Applied Arts, Vienna and the Bartlett School of Architecture/UCL, London. 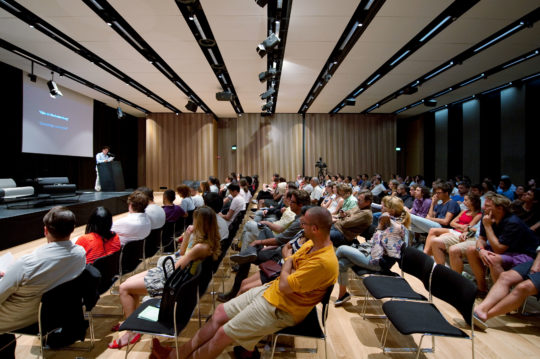 The mission Juričić as founder gave MLAUS from its inception has been to carry out research and developmental work in the field of architecture and urban strategies, and to promote speculative directions for architecture beyond ‘innocent and reductive approaches to ecology and sustainability’. It is this goal in mind that he, as CEO of the institute, in 2011 started the Proto/e/co/logics international summer symposium series, co-curated with Alisa Andrasek (Biothing). The strategic importance of the project was acknowledged by the Ministry of Culture and Foreign Affairs, which invited him to talk about the future of regional and urban development at the EU Committee for Regional Development in Brussels during the same year. 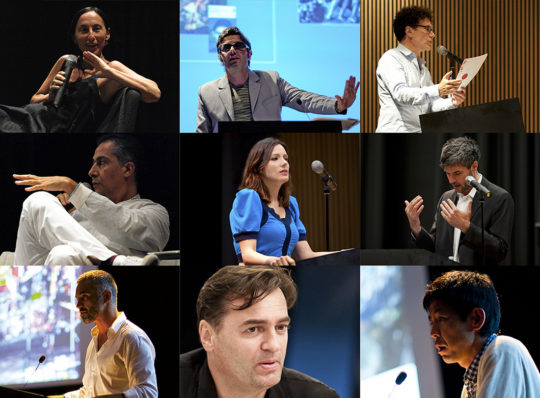 This year, envisioned as an ‘open platform for rethinking increasingly complex landscape of architecture and asymptotic cultures’, the third Proto/e/co/logics symposium Super-Seeding promises to relate to and extend the rich debates of the previous years’ events, The Field is Open (Hotel Lone, Rovinj, 1-2 September 2012) and Speculative Materialism in Architecture at the same venue from 6-7 August 2011 (see videos of lectures on Vimeo). Each time the curators Andrasek and Juričić have observed their high level symposia unravel ‘a contrasting myriad of facets, laying the ground to crystallize fresh ideas that continued beyond bounds of each event’, as they describe it.

The Field is Open, last September, with speakers including architects Michael Meredith, Eva Franch, Director of Storefront, NYC, Benjamin Bratton, Skylar Tibbits, Hernan Diaz Alonzo, Marc Fornes, Michael Hansmeyer, Roland Snooks, Dave Pigram, the academics Keller Easterling and Tom Kovac, an architect, and the artist Lucy McCrae, foregrounded the necessity for ‘the resilient bounding of global-local, generic-particular relations and transference, a navigational system for which increasingly accelerated scientific discoveries within the manifest image of the world are taken not as  obstacles, but as opportunities for further synthesis’, say the curators. Through a manifest expansion in material science and in cloud computing, transformations in constructability and manufacturing, such as the ongoing revolution with 3d printing and the Internet of things, the boundaries of architecture are becoming ‘fuzzy – the the Field is increasingly Open’. 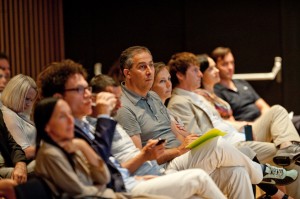 The curators, both of them architects and academics, recognise the active participation of ‘non-human forces in events, understanding further that such agency spawns beyond the human’, and providing a new ground for addressing issues of design ecology. ‘Unlike the principles of total holism that have characterized earlier ecological thinking, what this kind of synthetic approach offers is resilience and redundancy of transient boundaries, with the increased ability for interweaving contingent agencies. The role of those boundaries is not any more to enclose space, but rather to form tissue for osmotic exchange’, they state.

Speculative Materialism in Architecture, the first symposium in the series, held in 2011, exposed and questioned speculative new directions in architecture moving beyond the supposedly innocent and reductive approaches to ecology the curators refer to, encapsulated in catch-all terms like ‘sustainability’ and ‘green culture’ that seem to be bandied about all the time nowadays. The curators recall the words of philosopher Slavoj Žižek claiming that ‘the so-called ‘balance of nature’ is in itself a myth, considering that catastrophes have always been a constituent element of natural history.’ Broadly agreeing with this, they maintain that the question of ecology in architecture can ‘only be posed as an opening, a bridge between the organic and inorganic, a bridge between human world of categories and the independent real world. This opening generates different positions about what architecture really is, what its objects are, and what its manners of cognition are’. 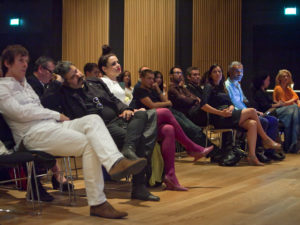 Speakers included Patrick Schumacher of Zaha Hadid Architects advocating his bold proposals for Parametricism as the new universal movement in architecture; Francois Roche’s alluring talk on ‘new kinds of synthetic (un)naturals through Eros versus machinism’, according to the curators, who also invited what they describe as ‘one of the most intriguing and delirious thinkers’, philosopher Reza Negarestani, who questioned whether ecology is possible after Copernicus, and philosopher Robin Mackay (Urbanomic). He expanded on this theme in terms of adaptations to current developments in computational architecture. In the programme there were also talks by ‘the veteran on all things ecological in architecture’, Sanford Kwinter, by Ed Keller on agents of revolutionary time, by Adrian Lahoud on post-Traumatic urbanism, Yoshiharu Tsukamoto (Atelier BowWow) on architectural ‘behaviorology’, and Tom Kovac gave his views at one of the rousing roundtable panels.

The curators, reflecting on their motivations and the impact of this first symposium, state: ‘rather than acting from a position of idealization with regards to nature, the ambition of this initial symposium was to abandon old models of thought which are manifested as eco-relationality, and instead produce a new speculative image of the matter driven by abstract mathematical models. And furthermore, it teased out speculative definitions of architecture as a product of contingent events, material histories, information webs, and networks of anonymous forces. That is to say, the symposium showed how the recent experiences in architecture aspire to approach the issue of design within a ‘denaturalised material ecology’ in a way that is not simply determined by the continual transformation of inherited forms and traditions of the discipline of architecture but which draws on a universal account of matter – matter as information, an account enabled by computation. Thus, geological, climactic, biotic, technological, aesthetic and even psychic factors are conceived as active agents – or, contributors to a ‘proto/e/co/logical’ posture toward architecture.

Super-Seeding, the third engagement with these complex themes, similarly promises to generate a lot of new food for thought and creative activity.