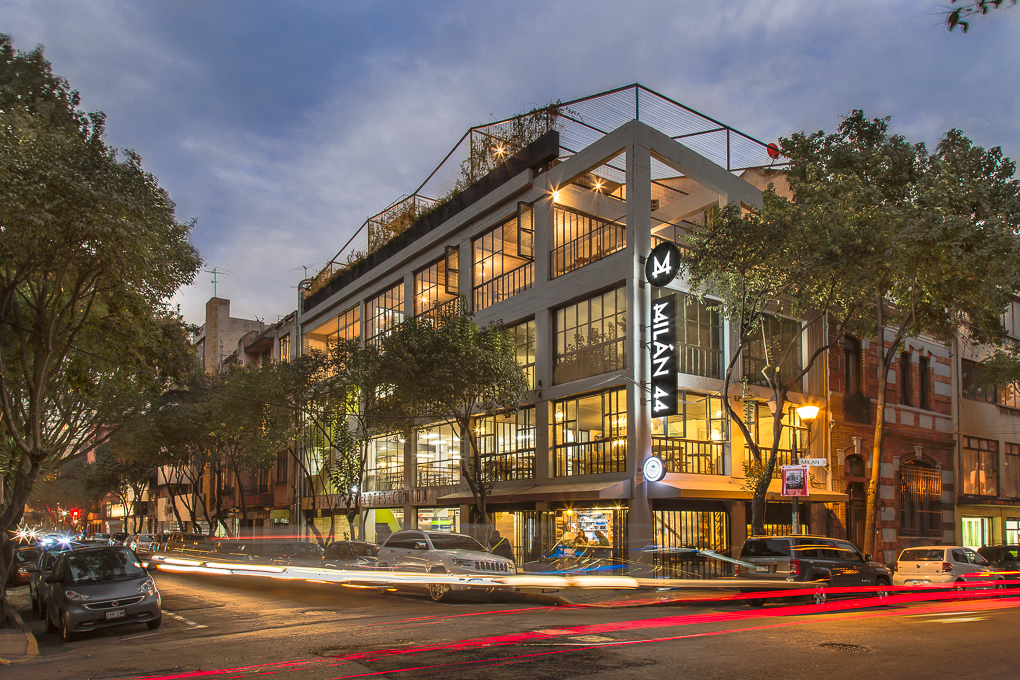 How to change perceptions of local public spaces through participatory design interventions and regenerate the fractured fabrics of neighbourhoods, shifting them towards mixed use, are never-ending challenges Mexican architect Francisco Pardo enjoys meeting.

Lucy Bullivant (LB): Francisco, tell us firstly about the programme of rethinking public space in Mexico to overcome bad conditions of social housing from the last 30 years and what you think is the best way to do this.

Francisco Pardo (FP): This was a programme developed not more than five years ago. Major cities in Mexico went through 30 years of exponential growth, especially towards their peripheries, that combined with the effects of the government leaving developers free to do as they wanted. We ended up with millions of housing units located far from city centres and from services.

This is a big problem, and the only logical solution is to demolish these units and relocate people in central city areas. The second best thing is to improve the public spaces to change social dynamics and get services to them. The worst solution is do nothing.

LB: What is most important for us to understand about your perceptions of Mexico City? 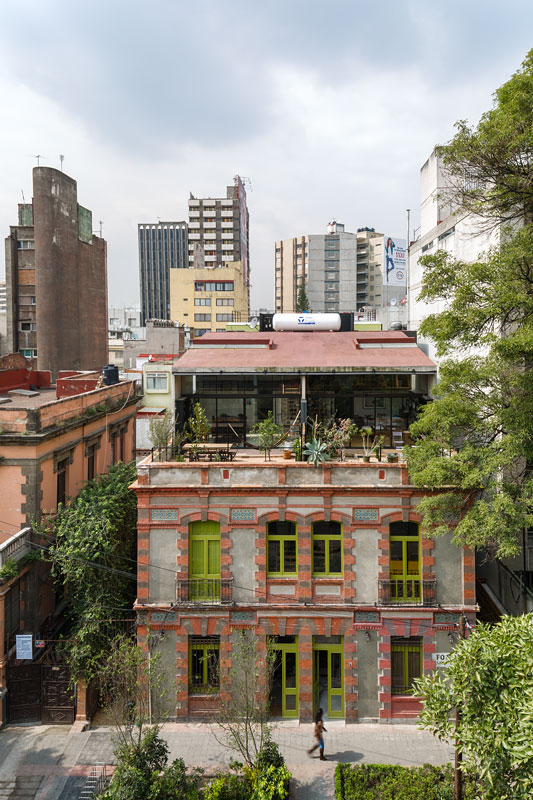 FP: I have always seen Mexico City as a layered city. Not in metaphor, but in reality and I place this order one on top of the other: Mexico Tenochtitlan, Aztec Empire, the colonial city, built on top of the Aztec ruins, and a series of new cities built on top of fallen structures from earthquakes. If you think of this, mixing a city floating on top of a lake with the seismic condition, you find a fascinating surreal urban condition. 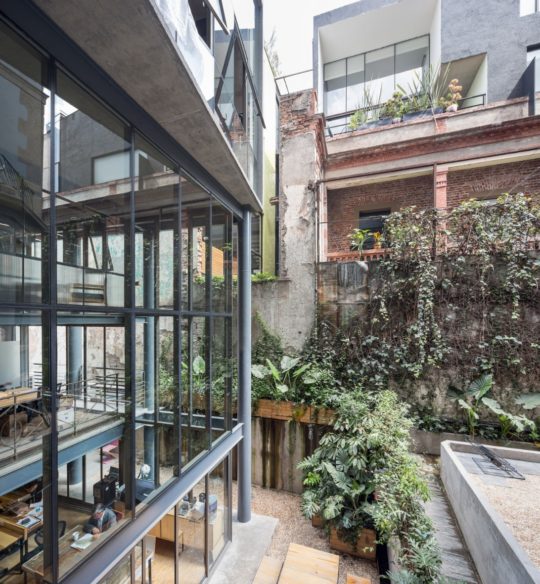 Havre 77 ReUrbano, 2015, Colonia Juarez, a conversion of a 19th century house into into 6 commercial spaces (offices, restaurants, two new floors with offices on top, and a new office building at the back of the house, all of them connected, AT103 Julio Amezcua + Francisco Pardo. 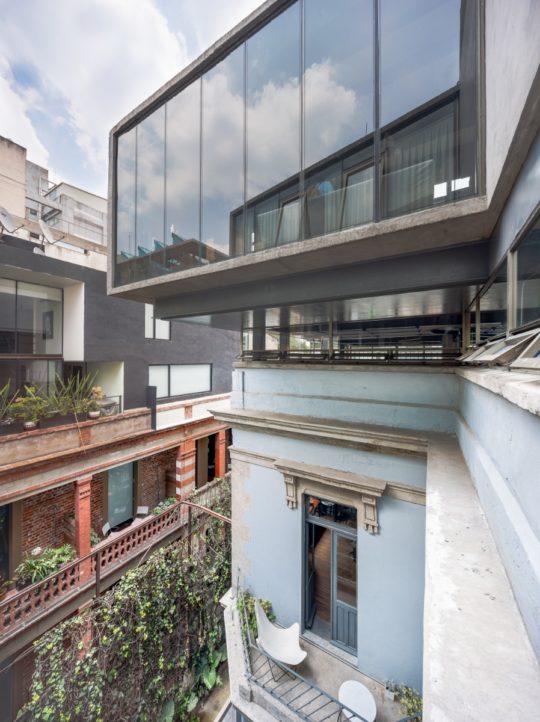 Havre 77 ReUrbano, 2015, Colonia Juarez, a conversion of a 19th century house into into 6 commercial spaces (offices, restaurants, two new floors with offices on top, and a new office building at the back of the house, all of them connected, AT103 Julio Amezcua + Francisco Pardo.

LB: You’ve been working in Colonia Juarez, a once affluent suburban area of the city with a dramatic history including revolution, and earthquakes scarring the neighbourhood with empty lots. It is now being renewed after being almost abandoned for decades. Which bodies are leading this renewal – public and/or private – and what is their commitment to greater social equity?

FP: They are mainly private sector bodies working in this area. It’s interesting that the private sector is the first to change the perception and the interest on the public sector. Colonia Juarez is geographically located in a fantastic place in between two major energies: on the south side is the Roma neighbourhood, the place that gives the title to Alfonso Cuarón’s new film, and where galleries, new restaurants, artists and most of the hipster life is happening.

On the north side is Reforma Avenue, a major financial corridor with huge bank headquarters and institutional buildings; to the west, Zona Rosa, which is the epicentre of gay culture and Korean immigrants; to the East – the historic downtown. And all these tribes merge like a little melting pot in Colonia Juarez. 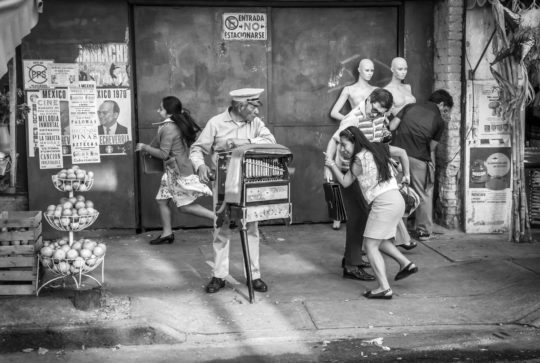 LB: Is this the most significant neighbourhood in Mexico City currently undergoing renewal, or are there others which are notable for positive progress as well?

FP: To explain its position, Colonia Juarez is the epicentre of change. You can also see some renewal going on in the surrounding areas I just mentioned and in more specific places such as Santa Maria la Rivera and San Rafael just north of Reforma Avenue. My take is that Doctores – east of Roma – will go under some important change in the next decade.

LB:  How do the public aspects of the buildings contribute to the regeneration of the neighbourhood’s fractured fabric?

FP: It is the most important part, because buildings have to be alive 24 hours so the city can start to live again. If you only place housing, or only offices in a series of blocks in a city, that area is only functional part of the day, with housing areas becoming sleeping cities, and office areas open during business hours. If you mix these uses – the street, then the block and then the neighbourhood become alive, helping to reduce crime in the area and reducing car use for transportation. It helps in every way you see it. 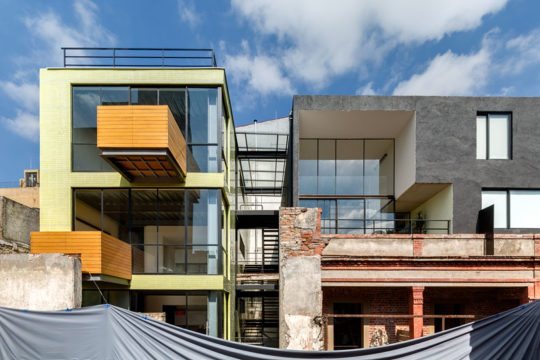 LB:You describe the new elements as ‘missing parts’ and ‘prosthetics’. Why is it so important to create a relationship with what has been lost over 100s of years of history? 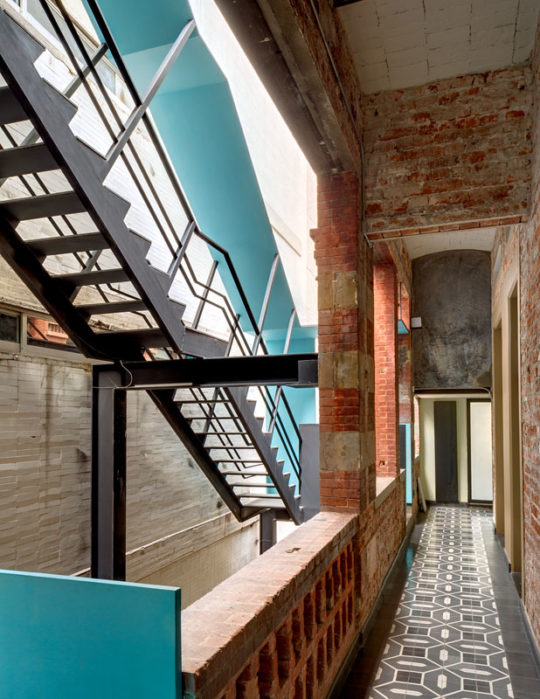 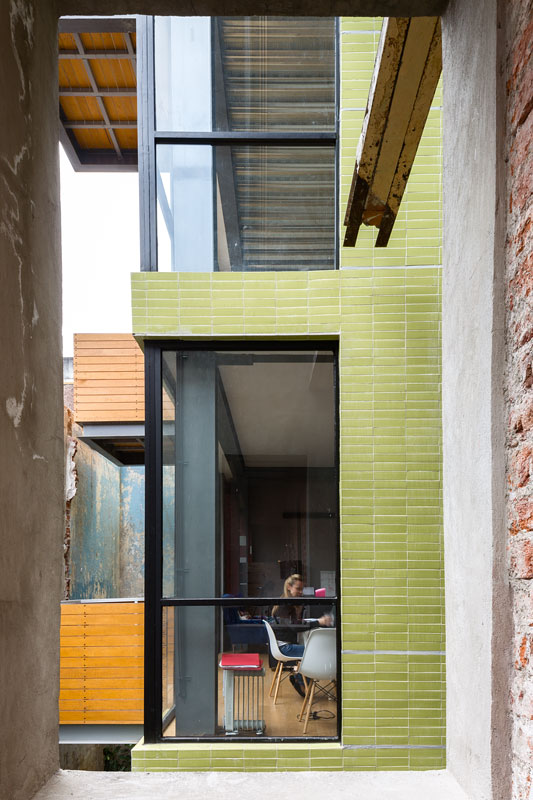 FP: I’m not so enthusiastic about creating a ‘tabula rasa’. I believe that everything is the result of another thing, and in the urban condition it is super important to think like this, as cities evolve and are in constant change. There is not a finish line – actually the finish line always moves. I think that is fine. Then also I think that every addition has to talk about its time, and the layers like you see in a section of a tree. I joke but it is serious when I say that architects should not design new buildings any more. As humans we need to stop adding more square metres of buildings. We could use the existing built and densify it, especially in the terms of housing and work space.

LB: How would you describe the housing sector in Mexico City now? Is there a crisis of lack of affordable housing that is improving, or getting worse? Is it more easily solved by converting old buildings, or by new build, or by a mix of the two?

FP: I think that the best approach is the mix of both, but the big problem we are facing in Mexico City – and I guess every major city has the same issue – that we cannot grow horizontal anymore. This was a tendency in the last part of the 20th century, but now it has to stop. We need to go up and inside, above the existing and inside the unused.

LB: How does your thinking about housing design in Mexico City contrast to the schemes built in earlier eras, for example, designed by architects like Mario Pani and others? 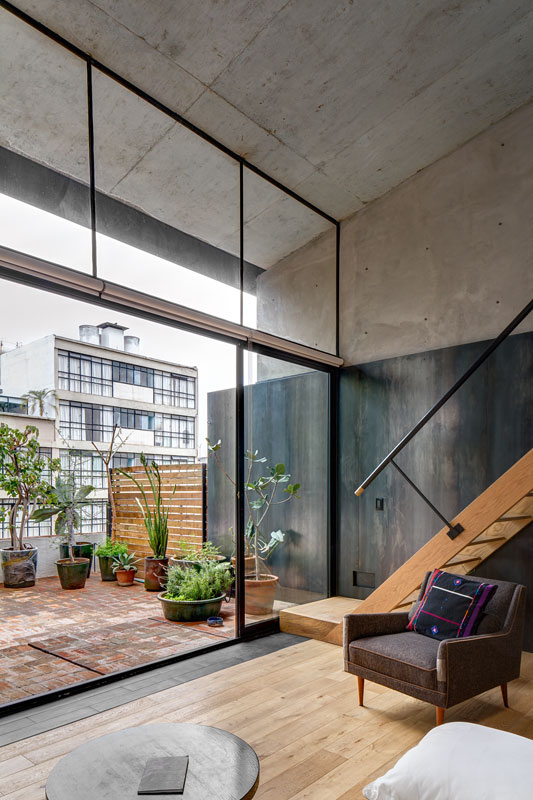 FP: I think that all that modernist approach was fine for that time – they were experimenting on building BIG. We have the data now and in retrospective we know it was not the best move but they did not. Mexico City went from having a population of 8 million to 20 million in a couple of decades so the need for new building was important. Now that the population growth is stable we need to be more efficient with regards to the infrastructure. When cars appeared more than 100 years ago, it changed the perception of a city, but now we now we need to go back a little to make a leap forward, and it’s by getting closer and tighter. 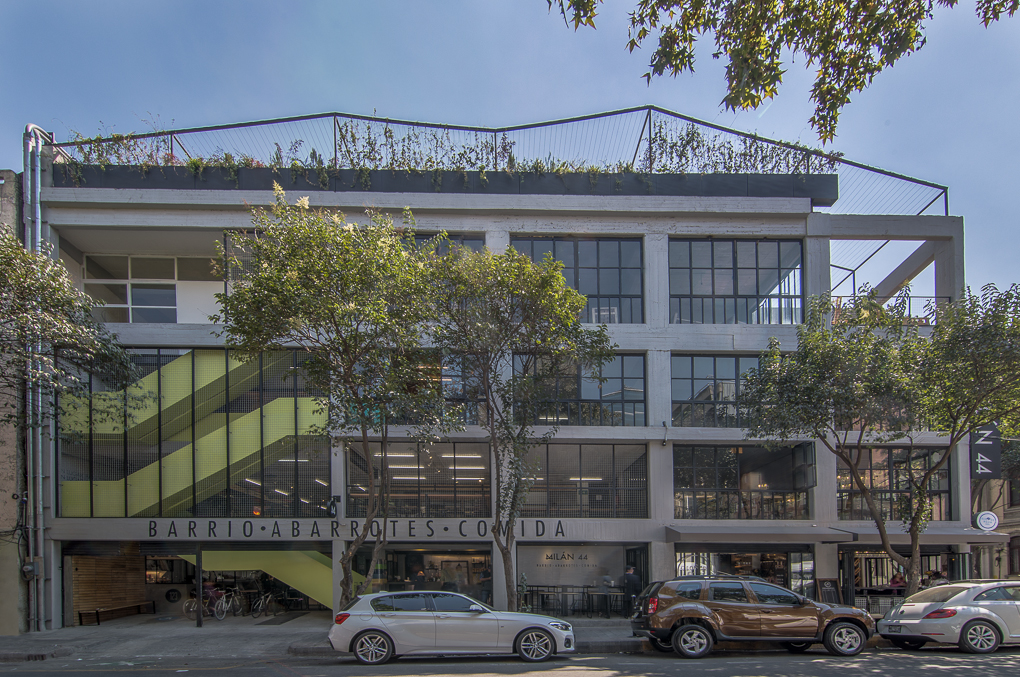 Milán 44, Francisco Pardo, 2017. The conversion of an old four storey warehouse originally home to an auto-parts shop into an urban market reactivates a neighbourhood and connects two entirely contrasting areas.

LB: Another of your projects, Milán 44, is a conversion of a car warehouse in the same district into a two-storey market with restaurants and other commercial spaces such as a barber’s shop and a yoga studio. What were the most important things to achieve in the process of adaptation for public uses? 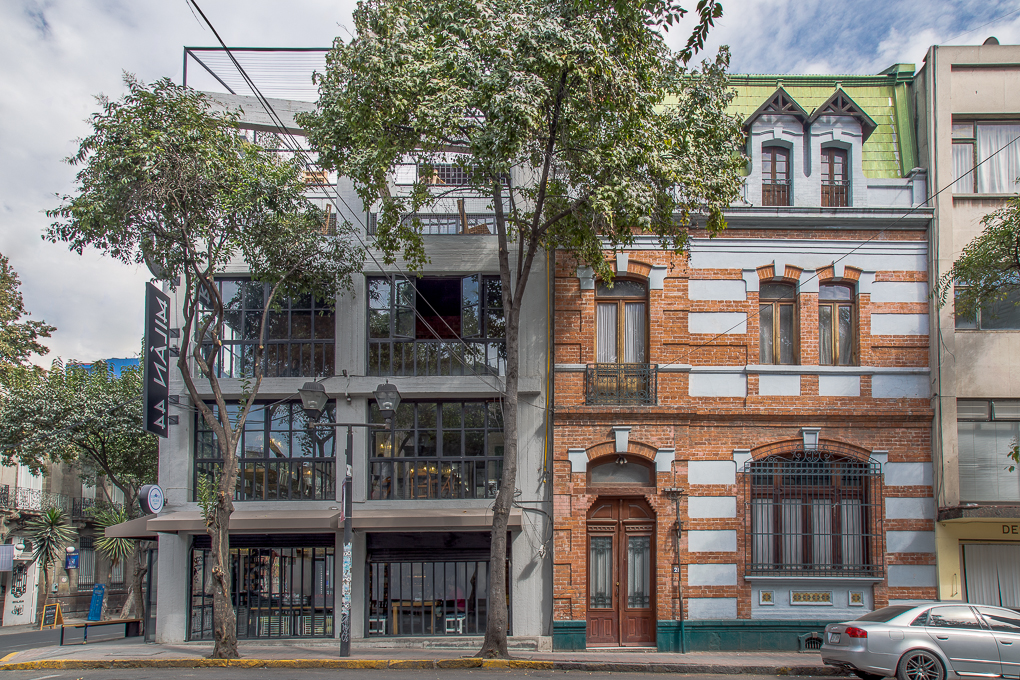 FP: Even our first sketches of this project had housing units on top, a full mixed use. We couldn’t make it happen for reasons of code, but the idea was that. The most important thing is to understand what kind of spaces go on ground floor and above floors. As an example, ground level is for commercial areas you pass through, a coffee bar, let’s say, while upper floors are for destination areas, such as a yoga studio, a doctor’s surgery, a restaurant. Higher floors are for office space or housing. The higher you go the more private it gets. 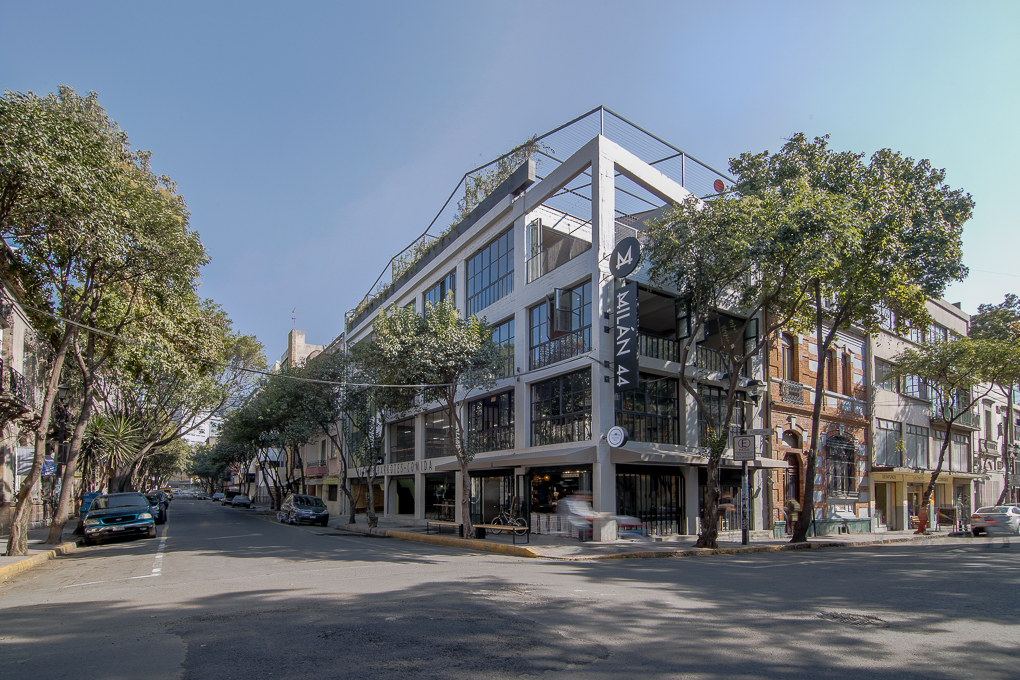 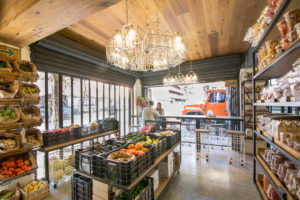 LB: Were you also creating a neighbourhood landmark building to change the metabolism and character of the district through the identity and functions of this single structure? 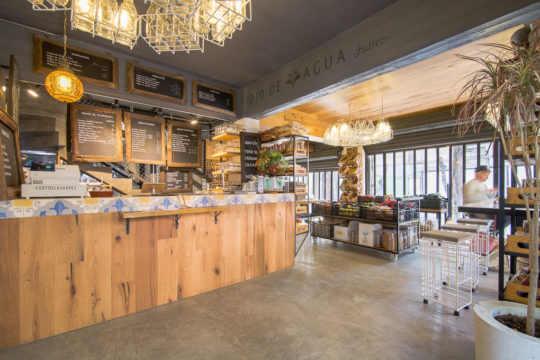 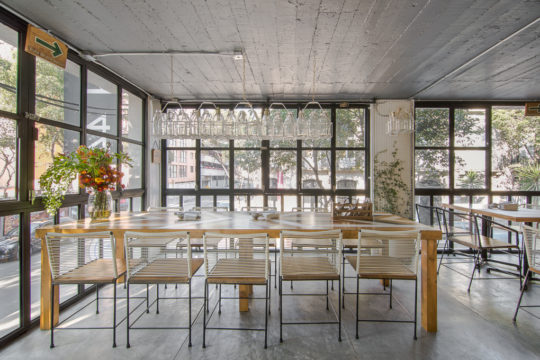 FP: Yes, it is a system of little pieces. All these buildings in the area we have done are for the same developer, so they work as a network generating tension between them. 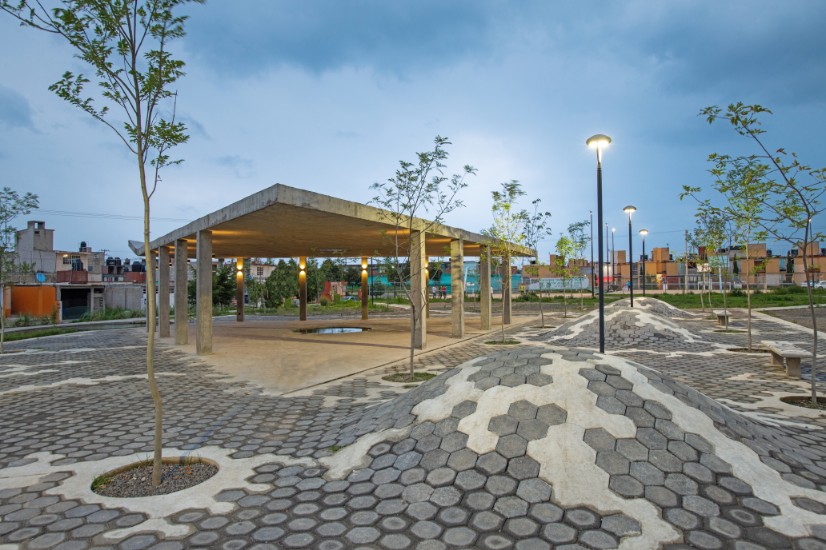 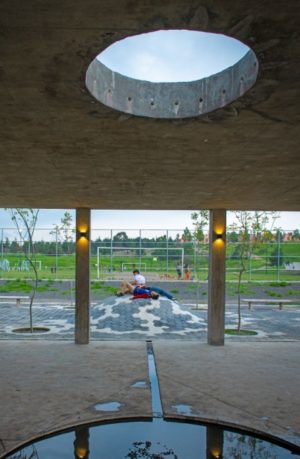 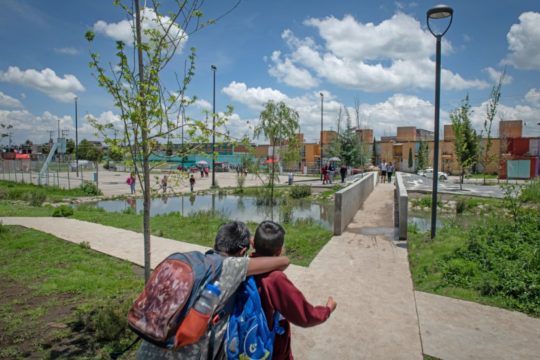 LB: How have you changed community perceptions of public space at Parque Colinas del Sol and Parque Héroes, projects which are part of a wider programme of rethinking public space to improve the poor conditions of social housing of the last 30 years and heal the scars of abandoned properties and social segregation affecting the marginal urban areas of the country?

FP: I was there last week, after 6 months of finishing the project. I talked to kids, mothers and fathers. They are super happy and feel like it’s theirs. That is the most important part of public space: you have to get the community to adopt the space, because if not, it becomes adopted by – as it was before – gangs and abandonment.

LB: Did you create the brief with the clients or with them and also with the local people through discussions and workshops?

FP: We did, we explained the main idea and the federal budget for the regeneration of public spaces ofhousing units. We discussed these with the community and got feedback, not on the formal aspects but about the aspiration part. We think we were almost in alignment with them. This is the reason that they have an ownership perception of their space.

LB: What do you feel makes these park projects valuable as systems potentially applicable in other contexts, as well as especially valuable for the city? 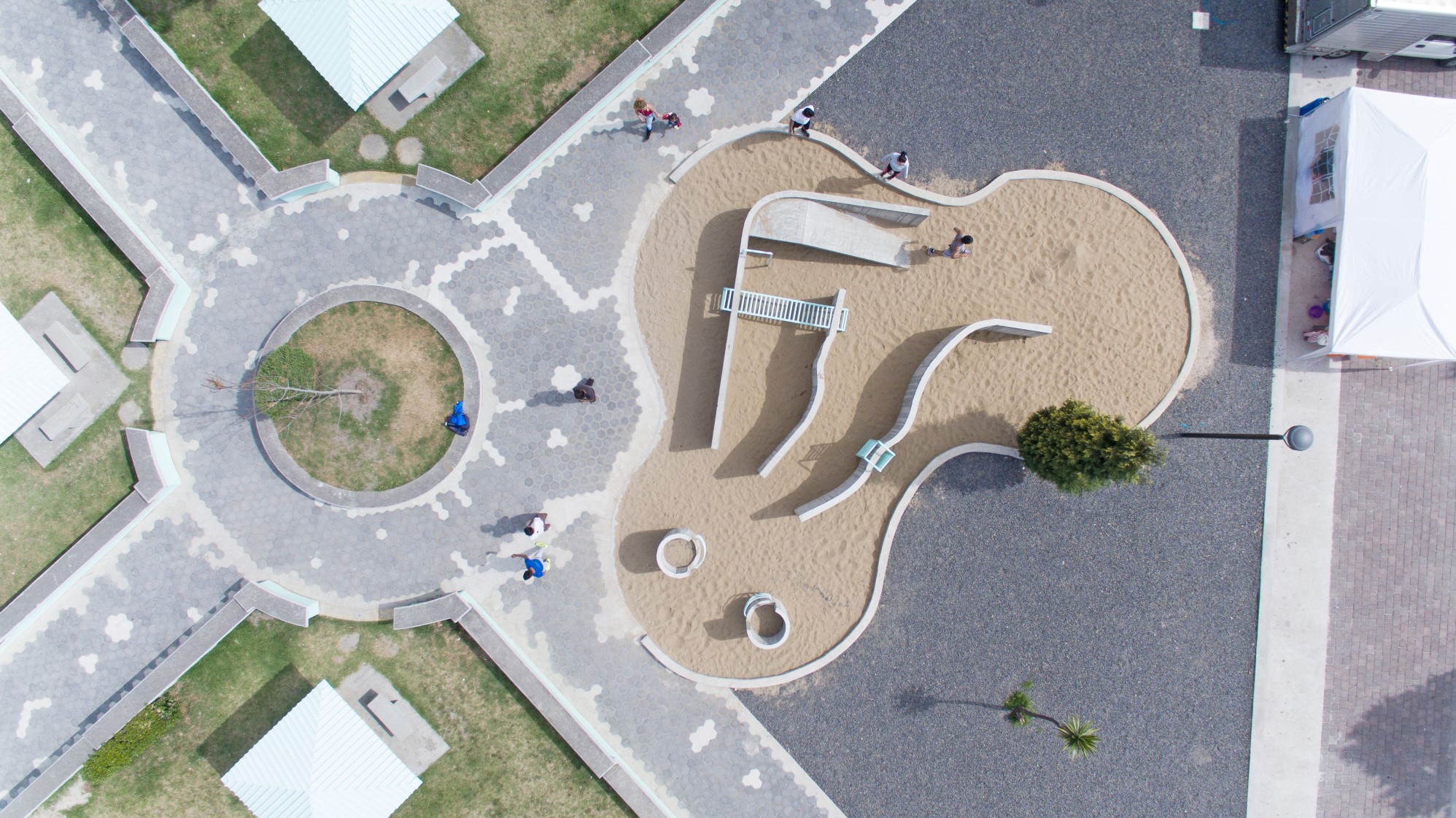 FP: Although they were designed according to specific natural and social conditions, both projects feature common elements ensuring a harmony between the built and natural environment that can be repeated or integrated in a system potentially applicable to any other context.

One is the floor cement block, that can be easily adapted to any layout both natural and artificial. The creative combination of the blocks and in-situ poured concrete filling generate new patterns like a sort of urban tapestry. 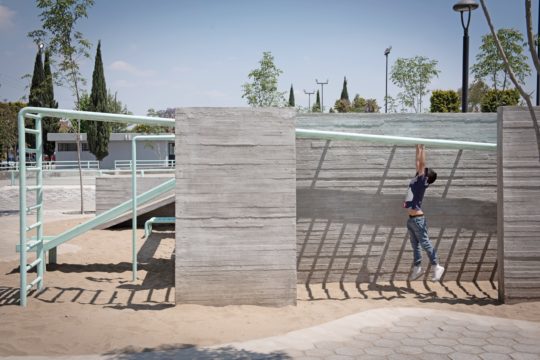 The second one is the replicable playground system, suitable for any surface. The different concrete walls and metal bars can be arranged in multiple configurations, designing different spaces suitable for various uses or circumstances. 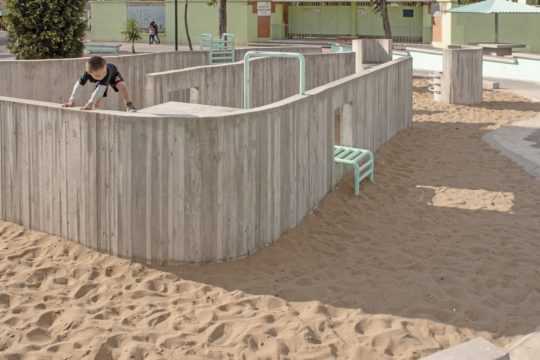 We can introduce these into any public area, and, depending on the budget and the area, we could implement these systems which will need almost no maintenance in the future.

More than just escapes to help citizens reconnect with nature, the parks are tools for engagement and environmentalism. Through the transformation of these marginal areas into green recreational spaces embedded in the city fabric, the parks are fast becoming a favourite urban spot for residents.

It is important to change not only the physical condition but also the perception of the space: as a designer I believe that supporting local communities to get better public spaces for their families helps the greater community.