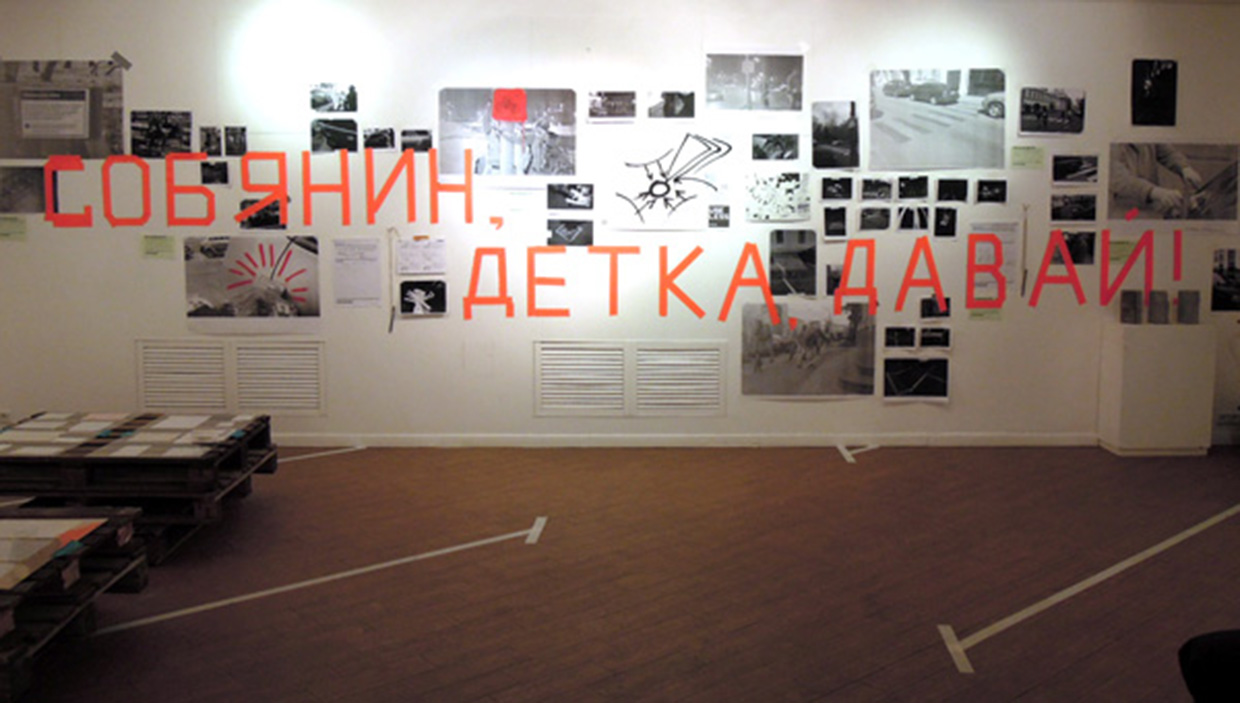 Partizaning's first year - an exhibition in December at Vostochnaya Gallery showing a year's worth of projects. (Photo (c) Partizaning)

The last several years have witnessed increased visibility and importance given to DIY cultures and tactical urbanism in cities across the USA, Canada and Europe. This is partially as a response to the financial crisis and limited resources for city maintenance and development, and resistance to the forms of neoliberal urban development. Active, creative citizens have begun to address the inadequacies of government functions, using temporary, creative interventions to suggest alternative realities.

DIY cultures are not new: most recently, they have long existed in Latin America, parts of Asia and in the former USSR (as well as other parts of the world, at different points in time), where capital-led urbanism was not the norm and people lived in circumstances of scarcity. These DIY traditions have demonstrated people’s ingenuity as the best solution in times of necessity; people can invent and deftly make do, especially in the city.

The tactical urbanism movement – led mostly by planners and architects – has built on DIY action in a strategic struggle for bottom up or grassroots urban planning. The same phenomenon is referred to as ‘urban hacking’ in parts of Europe. But what all of these actions share are active resistance and citizen participation in the processes and developments in our cities. 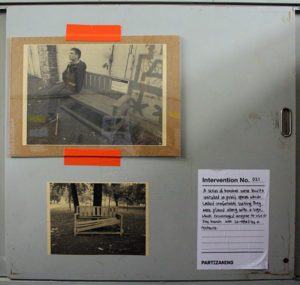 In Russia, we are witnessing a form of strategic, bottom-up urbanism being led by artists who work in the streets and writers, rather than by architects and planners. Creative people are working in public spaces to express themselves and to create dialogues with authorities and with other citizens. In this article I discuss the work I am doing as a member of the project Partizaning, leveraging artistic interventions in public space as a tool for social research and transformation; blurring the boundaries between everyday life, urbanism, activism and art.

Our idea is not to propose a new form of DIY urbanism, but to transform the idea of a top-down, expert planned city into one where residents are active stakeholders in the place they live; a space where they have a right to lead the lives they choose. I explain how we connect the ideas of DIY-ism and participation, as well as how Partizaning is a strategy which is aligned, but different from, tactical urbanism and conventional social art practices by its connection of research and process of creation.

In Context: Urban Planning in Russia 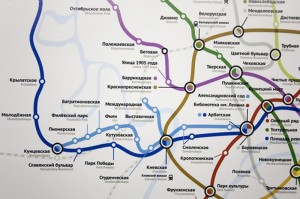 Partizaning’s map of the Moscow Metro which promotes our ideas of affordability, pedestrianism and walkability. (Image (c) Partizaning)

Russian cities are unique, complex entities. Following the revolution in 1917, all Russian land was nationalized and socialized, transferred to State or local authorities. The houses once belonging to the bourgeoisie were divided into accommodation for the proletariat. The collapse of a traditional spatial order required new planning approaches. At the time, ideas of a ‘socialist city’ were debated in terms of the concepts of two groups: the urbanists and dis-urbanists. Dis-urbanists wanted to dissolve the difference between town and country, while Urbanists proposed a contained expansion and planning of existing cities. The Garden City, an idea that flourished in the West, also became a starting point for the Soviet suburb. All this was resolved by the top-down functional and central planning in the form of high-rise apartments with wide-ranging amenities like schools and clinics located nearby. These ‘microrayon’ structures continue to exist today and present just one aspect or challenge of contemporary urban living in Russian cities. 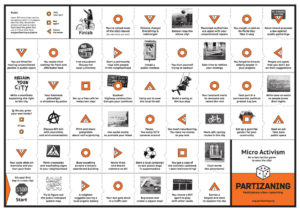 A game about urban tactics which we created and disseminated online and in print. (Photo (c) Partizaning)

After the collapse of the USSR, the country saw the growth of economy and a construction boom as a result of privatization. The Western model of a city and urban development began to take root; but after 20 years of post-Soviet development, most people still live in a reality which created by and for a centrally planned economy. How is this shift to a capital system possible without removing all ideals of social equity? 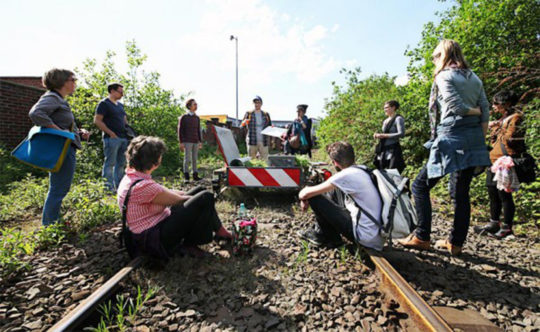 Russian cities as they now exist are struggling with remnants of Soviet-era urban planning and the development of a neoliberal form of the city. Although highly organized, these plans were not created for people to experience life in the city. Architects and bureaucratic planners promoted ideals like creating social equality through infrastructure and access. But ever since the collapse of the Soviet Union and subsequent privatization of space in the city, there have been many recurring urban issues worldwide, such as traffic, over-consumption and trash generation and resource overuse, each with an environmental impact.

So the idea of a ‘partizan’ re-emerges in this contemporary context of resistance and urban revolution. In Russian, the word means ‘guerrilla’ and the idea we promote is resistance to this form of urban development and engage people in the processes shaping their cities – advocating a sense of creative responsibility. With it, we are seeking to promote a new ideal and a new vision for cities – constructed by and for people, based on their explicit involvement and dialogues. Our work straddles the worlds of art and urbanism: we work in the city and with the public but use artistic venues as just one forum for sharing our ideas. 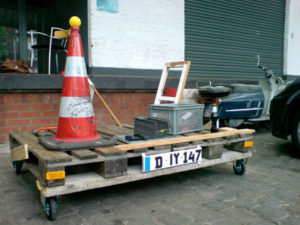 The website Partizaning emerged at the end of 2011 as an online project documenting examples of urban interaction and participation, whether social, political, environmental or anything else. Meant to inspire people, we show examples of projects in the public realm as creative achievements of social transformation through DIY and participatory actions. The site is managed by an interdisciplinary group of artists and researchers in two languages, because we realized that the project resonates, not only in Russia but as an idea taking root in cities around the world. So we document projects and people who work with the language of art to transform urban contexts worldwide. 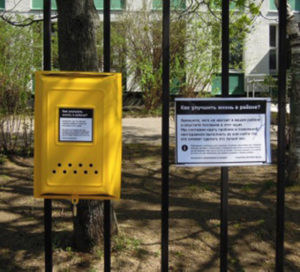 Part of our goal is to reorient the city around people and their goals and ways of life, rather than around expertise and bureaucracy. We recognize the important role of creativity as commentary and suggestion, while advocating people’s involvement, because residents know the city best and sometimes just need the tools to participate, or to express or converse ideas about it. The problem with how cities have developed is that they are perceived as places of work instead of sites of play and living. If you think of the city as an extension of your home, it is different. You are more willing to plant trees, to clean up trash, to decorate it, to repair it. But this is not an idea that is widely held – people are generally confined to their homes, their cars, and are restricted in public space. Partizaning proposes the idea that unsanctioned repairs and improvements can collectively help to re-create a better city. We have done things like made DIY benches, painted crosswalks and created maps and signs that promote an alternate trajectory for the city. 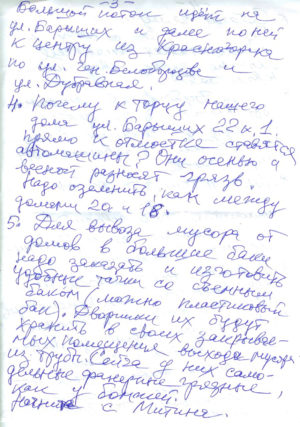 Scans of the mail received during the Cooperative Urbanism project. (Image (c) Partizaning)

We are motivated by a conflation of art and urbanism and are inspired by the role of the Situationists and of street art and urban interventions which fall into the realm of revolutionary urban and social activism. In Russia and internationally, we engage in participatory processes based on research and culminating in interventions in public space. We think of these interventions more as a process and dialogue. Apart from projects, we try to promote creative grassroots urbanism and participation by giving lectures, presentations and conducting workshops in various cities. We also try to produce a bulletin which is occasionally printed as another format for people to interact with some of our ideas. 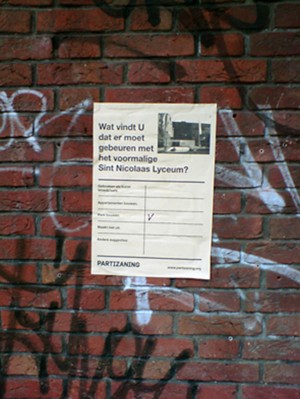 In 2012, we did a project based on installing Public Mailboxes in outlying districts of Moscow. An experiment in the idea of collaboration and in the concept of cooperation in the city, we tried to get people to communicate their urban challenges and desires by leaving us anonymous mail. Our goal was to work with the idea of how people could reorganize their city from the bottom up and engage in processes that are generally impenetrable. What we found was that creating unsanctioned and unwatched forums in public space involved children and the elderly, who had varied and different suggestions and ways of using the mailboxes. As part of this project, the mail was scanned and shared with participating municipal authorities who could respond to people’s concerns – but the other part of the project was to encourage people to be the agents of urban change in their own neighbourhoods, particularly if they already knew the problem.

What Should Happen to Sint Nicolaas Lyceum? 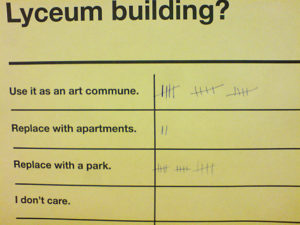 In Amsterdam, as part of the Kunstvlaai Festival, we put up large format posters surveying residents in the district under transformation for insights about a building that was going to be demolished. We found people to be apathetic about future changes in their city and wanted to facilitate a public dialogue. This is another way in which we have sought to promote the idea of urban participation in varied contexts.

We are interested in how to facilitate and moderate user-oriented cities, promoting the belief that residents know best what they need and how they should behave in a moderated dialogue with other activists and experts. But one of the concerns and challenges we faces is truly involving overlooked and minorities in the city – voices that remain unheard and invisible, but are part of the urban fabric. In cities like St. Petersburg, Moscow, Amsterdam and Dusseldorf we find that our projects are invariably used by voices that don’t have forums for expression – or become taken over by those who seek to control the socially unaccepted.

Ultimately, as researchers, artists and urbanists, we find ourselves trying to use the language of art as a tool for inquiry to understand urban processes and facilitate a form of participation based on art and ideas of inclusion. To what extent we are successful can be debated, but as an experiment we believe that art in the city has a right to public space and interaction in the same way all urban residents do.

Shriya Malhotra is an urban researcher and intervention artist based in Moscow with Partizaning. She has an MA in Cities and Urbanization from the New School and collaborates on participatory art and process based projects that highlight the unseen or unusual aspects about cities and urban life.