The Sound of Cycling

The 2013 Velo-city Conference in Vienna, Austria, brought together citizens, policymakers, and business people to discuss how cycling can become mainstream in both developed and developing countries.

Bicycle bells – 1,500 of them – chimed in concert as the maestro conducted his bicycle band and the participating audience in its Vienna premier. Serving as the backdrop of the bicycle band, five people using bicycles and bike bells as percussion instruments, was Karlskirche, St. Charles Church in Karlsplatz, and the cloudless, blue skies of a summer night in Vienna. 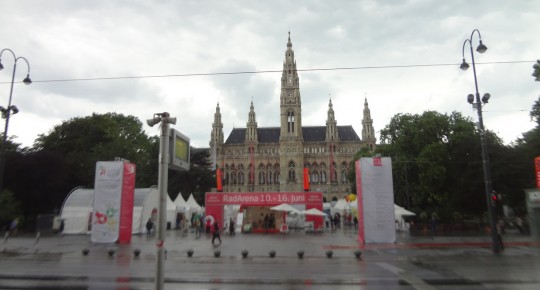 So began ‘The Sound of Cycling’, the ninth Velo-city Conference, which was held this year in Vienna, Austria. Since 2009, the Velo-city Conferences have taken place annually as opportunities for advocates for cycling in cities across the globe to meet, mingle, and try to solve the world’s problems with the simple, sustainable solution of cycling. The cheesy title of the conference was forgiven only as a result of its venue: Rathaus, Vienna’s beautiful City Hall, built in the late 19thcentury in the Gothic tradition. 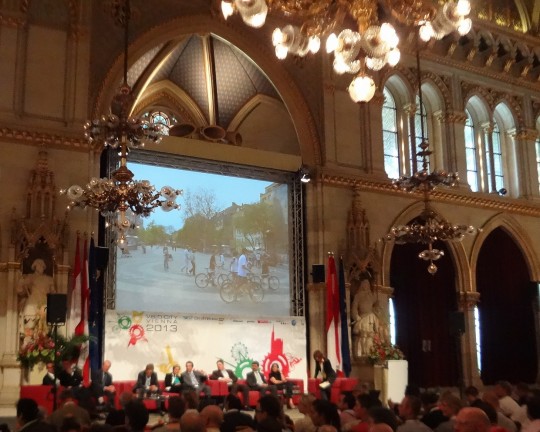 The Mayors Panel Discussion at the 2013. (Photo (c) Julia Thayne)

During the course of the four-day conference, Rathaus hosted more than 100 talks about cycling in cities, with more than 1500 delegates attending the events. Discussions from Tuesday 11 June to Friday 14 June 2013 took a variety of forms: podium lectures in which high-profile politicians and academics lectured on cycling initiatives; roundtables in which participants rotated from table to table every 45 minutes to listen to experts’ presentations; and lightning speed talks in which experts gave short lectures before fielding questions from delegates seated at small high-top tables. These were just three of the many formats used to discuss the issues of Velo-city 2013, which ranged from integrating public transit and cycling to encouraging women to cycle, comparing urban bicycle maps, and using technology to collect data about cycling. 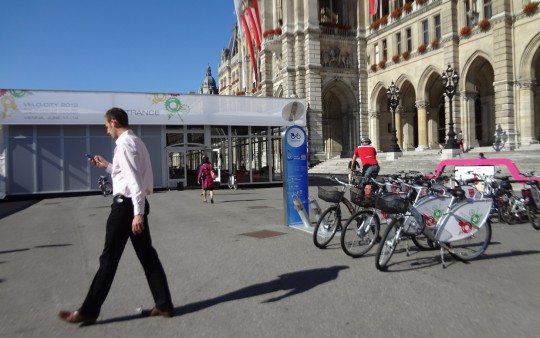 A man takes a break from the 2013 Velo-city Conference. (Photo (c) Julia Thayne)

Most of the lectures focused on European cities’ successes and challenges with mainstreaming cycling in urban areas. The Mayors’ Panel Discussion, for example, included mayors and deputy mayors from Vienna, Bratislava, Stockholm, Prague, Copenhagen, Munich, and Nantes. They agreed that political support was imperative for cycling to be successfully adopted in cities. Vice Mayor of Munich (and winner of this year’s Velo-city Leadership Award) Hep Monatzeder, in particular, stressed the need for cities not only to provide the network infrastructure for cycling, but also to launch aggressive marketing campaigns aimed at increasing cycle mode share across all types of urban trips. He argued that this marketing must be catchy and culturally relevant, using the example of how images advertising the statue of Lady Bavaria, the personification of Bavarian culture, with bike helmet in hand (cheekily) encouraged cycling by appealing to cultural traditions.

Bicycle parking stands in the shape of a car demonstrates the conference’s dedication to more sustainable forms of transport. (Photo (c) Julia Thayne)

Although fewer in number than their European counterparts, presentations by non-European panelists also spanned a variety of subjects. A representative from the San Francisco Municipal Transportation Agency discussed how San Francisco is utilizing tech-savvy solutions, private-public partnerships, and data collection to revamp the city’s cycle network there. The efforts are intended to change San Franciscans’ attitudes towards cycling, increasing bicycle mode share from 4% to 10 % in the next six years. A representative from the non-profit organization Macleta in Chile discussed the ways in which Macleta  encouraged women to overcome gender stereotypes, thereby increasing the number of female cyclists in Santiago. 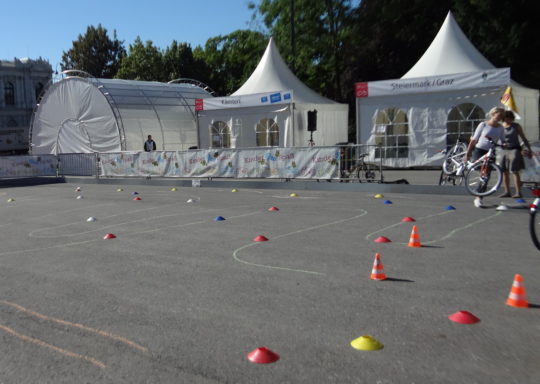 But by far the most thought-provoking speech of the conference was delivered by someone who claimed to know nothing about bicycles at all. Shipra Narang Suri, Vice President of the International Society of City and Regional Planners, gave a stunning presentation about the challenges of promoting cycling in the developing world. ‘Cycling is a positive choice in the North,’ according to Narang Suri, but ‘it is not so in the South…In the global South, it is an act of desperation.’ Narang Suri stressed that in most parts of the developing world, owning a car is seen as the ultimate indication of success, while cycling signals poverty. Overcoming biases against cycling will require reminding policymakers in the developing world that cycling has major economic effects, mainly because the poor largely use their bicycles either to travel to work or to work, period. It will also require adhering to principles Narang Suri laid out in her discussion – sustainability, safety, inclusion, and efficiency – which she suggested were essential to improving the environments for and attitudes towards cycling in the developing world. But, as Narang Suri cautioned at the end of her speech, ‘Cycling is not going to solve the problems of the world. But it is a piece of the puzzle.’ If there was any takeaway from this conference, it was just that – that cycling can be used to support goals of sustainability and social inclusion; however, for this to be accomplished, politicians, businesses, and civil society must work together to support physical and cultural aspects of cycling. 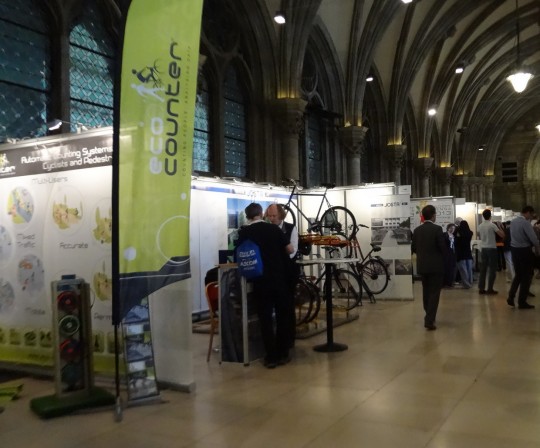 Cycling-based excursions and events accompanied the conference proceedings. Every morning, bike yoga was held in the park in front of Rathaus. Evening events included a bicycle fashion show, a garden party, a bicycle parade, a bicycle exhibition, a bike film night, and, of course, the bicycle bell concert. They also included one of the conference’s signature events, the Cycling Visionaries Award. People from around the world were invited to submit ideas for cycling projects in five categories: advocacy and social projects; science, research and development; design, fashion and cycling equipment; urban planning and urban design; and cycling and the arts. Of the more than 218 submissions originating from 49 countries, 60 were chosen for the award. Winners were honoured with free attendance to the conference and during the Cycling Visionaries Awards Ceremony.

Overall, Velo-city 2013 was deemed a success, and it closed by handing over the torch to next year’s host: Adelaide, Australia. For more information about this year’s Velo-city Conference in Vienna, please visit: http://velo-city2013.com/.

Both personally and professionally, Julia Thayne is interested in utilizing the power of cities to deliver positive economic, environmental, and social change. In pursuit of this goal, she completed her master’s degree in City Design at the London School of Economics & Political Science (LSE). At LSE she co-led an urban design project promoting cycling in London’s most deprived neighborhoods; co-managed the Sustainable Futures Group, which evaluates and funds student-proposed sustainability projects on LSE’s campus; and just submitted her dissertation on re-using vacant school spaces in the United States. Julia is now a researcher at The Crystal in London, a sustainable cities initiative by Siemens AG. In addition, she writes for Urbanista.org, and has volunteered for and contributed to several conferences on urban issues, including the 2013 Velo-City Conference (on which she reported for Urbanista.org this summer). Prior to LSE, she worked in economic consulting, urban development, and international aid, notably spending three years with Ernst & Young LLP’s Quantitative Economics and Statistics Group (QUEST).  At QUEST Julia co-authored several articles and publications on fiscal policy, as well as served as the youngest manager in a new, multi-million dollar service line, which she helped to launch.