The first International Award for Public Art (IAPA) has been awarded to Tiuna el Fuerte Cultural Park, Caracas,Venezuela, a self-initiated project by Alejandro Haiek Coll, Eleanna Cadalso and Michelle Sánchez de León of the architects collective Lab.Pro.Fab (Venezuela). By occupying underused land within the city of Caracas, the project addresses the city’s lack of green space and fulfils a need for youth programming.

The International Award for Public Art was co-founded in 2011 by the two magazines Public Art China and Public Art Review (USA) with the aim of propagating knowledge about the international practice of public art. The theme of the first award is place-making, selected from global public art projects completed between 1 January 2006 and 30 September 2011. 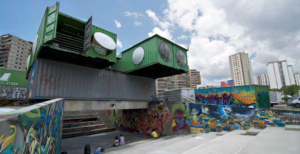 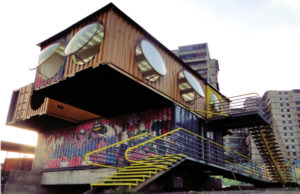 A self-initiated project by Alejandro Haiek Coll, Eleanna Cadalso and Michelle Sánchez de León of Lab.Pro.Fab, Caracas, Venezuela. By occupying underused land at Calle Longaray within the city of Caracas, the project addresses the city’s lack of green space and fulfills a need for youth programming.

“This self-commissioned project encompasses an emerging collective cultural movement led by architects and artists, which is focused around the development of a park on an abandoned parking lot. The park infrastructure was built using cost-effective, low-energy technologies. Recycled shipping containers, for instance, were grouped together as modular elements in expandable multi-use spaces. Increasing green coverage in the city was another project priority. Currently the Capitol District of Caracas contains an average of .26 square meters of park space per inhabitant, compared to the World Health Organization’s recommended standard of 10 to 12 square meters of park space per city inhabitant.

In recent years, the project area has continued to expand, becoming a city cultural park containing offices, classrooms, dining spaces, green spaces and sports areas, and with plans for organized workshops and other activities promoting development in the arts and sciences. At present, of a total of five planned projects two have been completed. There currently exist a store, a cafeteria, administrative offices, a radio station, and a music-editing studio. On a daily basis more than 500 children and adolescents participate in cultural and artistic events in the park.

The name of the park is a reference to a nearby military base, Fuerte Tiuna. However, “Tiuna” was originally the name of a native warrior from the region. Thus the name has been re-appropriated to restore its natural and social connotations.  The artists did not put their hopes in government assistance, but rather relied on civic involvement to promote public art. The project reflects the creativity, cohesiveness and the capacity that is possible when hands join together to improve the social and human environment”. 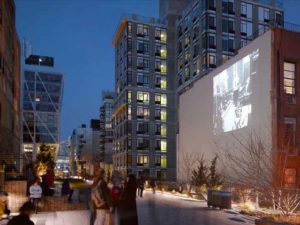 by Not Vital, near Agadab, Niger. Image: Mekafoni, a house in artist Not Vital’s Niger Buildings. 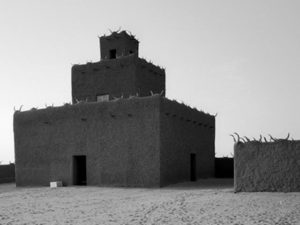 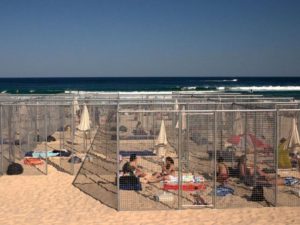 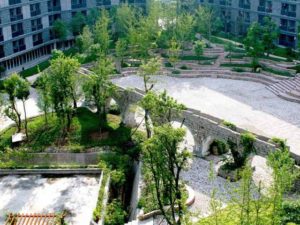 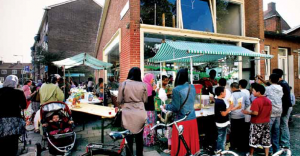 A total of 141 projects from around the world were researched, including those that are temporary and permanent. The shortlisted projects were selected for the centrality of the artist’s role, for their effectiveness in place-making, for their professionalism, their innovative design and the quality of their technical construction.

The variety of public art forms researched and documented for the prize reflects cultural expression in modern life around the world. Among the place-making projects to be researched were mural painting, sculpture, community transformation projects, space conversion and art events, among other forms; most of them were concerned not only with the spatial environment, but also with the cultural and historical context of place, and different views concerning daily life whether urban or rural. 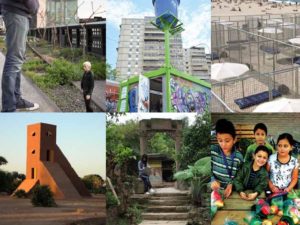 The projects may have initiated or be integral to community development, or the reconstruction and remodeling of a place; the artist’s special contribution may be to highlight the cultural or ecological significance of a place. Murals and sculptures, in the context of the contemporary practice of public art, no longer have simply a decorative function as ‘environmental murals’ or ‘urban sculpture. Neither do these works in the main rely on the artist’s individual language or style, but instead they focus on expressing clear social values and cultural ideals. So they illustrate profound propositions about contemporary culture at different levels, reflecting contextual relationships within the urban environment.

The jury was composed of experts in international contemporary public art who reviewed and commented on the 141 projects, and selected six finalists, one from each continent.

Lewis Biggs, former artistic director and chief executive of the Liverpool Biennial;  Wang Dawei, dean and professor of Fine Arts College, Shanghai University, and chief editor of Public Art magazine (China); Jack Becker, artist, critic, founder and executive director of the nonprofit Forecast Public Art, and publisher of Public Art Review; Katia Canton, an art critic, curator, and academic in Brazil, professor at the University of Sâo Paulo, and curator of the Museum of Contemporary Art; Fulya Erdemci, artistic director of Istanbul International Biennial 2013, director of SKOR | Foundation for Art and Public Domain, Amsterdam, and curator of the Turkish Pavilion at the 53rd Venice Art Biennial, 2011; and Yuko Hasegawa, a contemporary art critic, chief curator of the Tokyo Museum of Contemporary Art, art professor at Tama Art University, and a member of the Asian Art Council at the Guggenheim Museum.